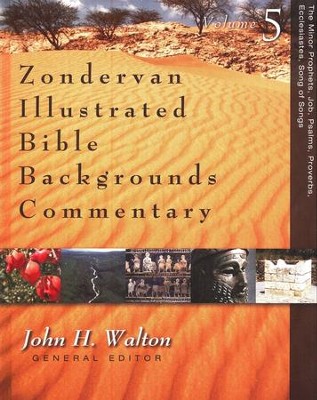 Written by an international team of 30 scholars and specialists, the Zondervan Illustrated Bible Backgrounds Commentary series presents a scholarly and critical introduction, in a beautifully illustrated presentation, to the books of the Bible. In Volume 5 top scholars such as David W. Baker, lead us through the biblical books of The Minor Prophets, Job, Psalms, Proverbs, Ecclesiastes, and the Song of Songs.

Each book is set in its original historical and social context, and major issues such as translation, chronology, and authorship are presented in detail via a passage-by-passage commentary. Analysis into the literature of the ancient Near East will open your eyes to new depths of understanding both familiar and unfamiliar passages, while over 2000 photographs, drawings, maps, diagrams and charts provide a visual feast that breathes fresh life into the text.

This series, or its individual volumes, with its informative commentary and beautiful photographs, insightful outtakes, will make an excellent home school curriculum, church, curriculum, and would be perfect for courses in a Christian high school. It will also be ideal for anyone who wishes to undertake a comprehensive, but introductory study to specific sections of the Bible, or the Bible in its entirety.

▼▲
Many today find the Old Testament a closed book. The cultural issues seem insurmountable and we are easily baffled by that which seems obscure. Furthermore, without knowledge of the ancient culture we can easily impose our own culture on the text, potentially distorting it. This series invites you to enter the Old Testament with a company of guides, experts that will give new insights into these cherished writings.Features include• Over 2000 photographs, drawings, maps, diagrams and charts provide a visual feast that breathes fresh life into the text.• Passage-by-passage commentary presents archaeological findings, historical explanations, geographic insights, notes on manners and customs, and more.• Analysis into the literature of the ancient Near East will open your eyes to new depths of understanding both familiar and unfamiliar passages. • Written by an international team of 30 specialists, all top scholars in background studies.

Andrew E. Hill (PhD, University of Michigan) is professor of Old Testament studies at Wheaton College in Illinois. He is the coauthor with John Walton of A Survey of the Old Testament and the author of Malachi in the Anchor Bible commentary series. His articles have appeared in such scholarly publications as Hebrew Annual Review, Journal of Biblical Literature, and Vetus Testamentum.

▼▲
'This tool is a rich gift to everyone who seeks to teach Scriptures.' -- John Ortberg, author and pastor

'A unique and important commentary. …There is nothing else like it available today.' -- Richard E. Averbeck, professor of Old Testament and Semitic Languages, Trinity Evangelical Seminary

'To me, every Christian should own these commentaries.' -- Dan Kimball, author and pastor

'This is an impressive and rich resource…judiciously researched. …Notwithstanding their traditional approach to Scripture, I heartily recommend this series with enthusiasm.' -- Shalom Paul, Professor Emeritus and former Chair of the Bible Department, Hebrew University

'Enables scholars, pastors, and laity to access the rich data from over one hundred and seventy years of explorations and excavations in the Near East.' -- K. Lawson Younger, professor of Old Testament, Trinity Evangelical Divinity School

▼▲
I'm the author/artist and I want to review Zondervan Illustrated Bible Backgrounds Commentary, Vol. 5 The Minor Prophets, Job, Psalms, Proverbs, Ecclesiastes, Song of Songs.
Back
Back