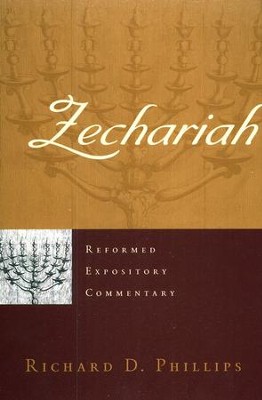 ▼▲
In Zechariah, Richard D. Phillips shows how the book of Zechariah records the prophetic message given to the community that had returned to Jerusalem after the Babylonian exile and charged them with rebuilding the temple and city. He explains that the physical return was meant to prompt a spiritual and theological return to faith in the Lord, and that Zechariah called the people to such a true return and reassured them of the Lord's willingness to receive them and restore to them the promised blessings. Phillips illuminates Zechariah as a book whose eschatological perspective is of special value to Christians today who labor for reformation and long for revival.

About The Reformed Expository Commentary Series:

The Reformed Expository Commentary focuses on the English rendering of the biblical text, and thus does not address concerns of the original language nor academic technicalities. Rather, proceeding section-by-section it focuses on the narrative flow of the biblical book, while drawing out significant points or theological emphases in the text, and then applies them to the daily life of the Christian.

br/>The various points addressed range between historical events taking place within a books narrative, or upon significant doctrinal statements that are made. The application or "guidance" section as the series calls it rounds out each of the particular emphases from the text making it a complete expository volume. Each commentary approaches the text from a Reformed theological perspective, and can be used profitably for either study or devotion.

▼▲
The book of Zechariah records the prophetic message of Zechariah to the community that had returned to Jerusalem after the Babylonian exile and was charged with rebuilding the temple and city. But the physical return was meant to prompt a spiritual and theological return to faith in the Lord. Zechariah called the people to such a true return and reassured them of the Lord’s willingness to receive them and restore to them the promised blessings. It is a book with an eschatological perspective of special value to Christians today who labor for reformation and long for revival.

▼▲
Richard D. Phillips (MDiv, Westminster Theological Seminary; DD, Greenville Presbyterian Theological Seminary) is the senior minister of Second Presbyterian Church of Greenville, South Carolina. He is a council member of the Alliance of Confessing Evangelicals and of The Gospel Coalition, chairman of the Philadelphia Conference on Reformed Theology, and coeditor of the Reformed Expository Commentary series.

▼▲
Rick Phillips has produced a gem of a book on the prophet Zechariah! It is popular in its presentation but reflects a wide reading in Puritan theology, critical commentaries, and conservative Reformed writers. In a word, it has all the hallmarks of an edifying commentary: it is historically sensitive, it is robustly theological, christological, and appropriately practical. Phillips reminds us in his methodology that what God has done and will do for the people of God always precedes what God expects of His people. I wholeheartedly commend this work for pastors and lay people. -- Bryan Estelle Associate Professor of Old Testament Westminster Seminary California

▼▲
I'm the author/artist and I want to review Zechariah: Reformed Expository Commentary [REC].
Back
Back