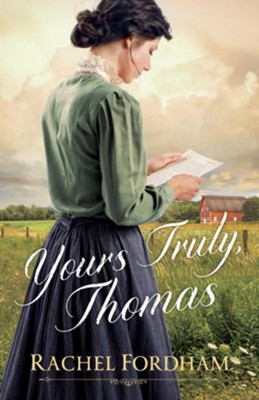 Penny was working at a slow mail office with nothing to do when a letter comes across from a brokenhearted man to his true love.  She makes it her mission to get this lost letter into the hands of the intended woman.  She wants to find the rightful owner but she cant help but long for this stranger.  She finds herself caring perhaps too much.

▼▲
For three years, Penny Ercanbeck has been opening other people's mail. Dead ends are a reality for clerks at the Dead Letter Office. Still she dreams of something more--a bit of intrigue, a taste of romance, or at least a touch less loneliness. When a letter from a brokenhearted man to his one true love falls into her hands, Penny seizes this chance to do something heroic. It becomes her mission to place this lost letter into the hands of its intended recipient.

Thomas left his former life with no intention of ending up in Azure Springs, Iowa. He certainly didn't expect a happy ending after what he had done. All he wanted to do was run and never look back. In a moment of desperation, he began to write, never really expecting a reply.

When Penny's undertaking leads her to the intriguing man who touched her soul with his words, everything grows more complicated. She wants to find the rightful owner of the letter and yet she finds herself caring--perhaps too much--for the one who wrote it.

▼▲
Rachel Fordham is the author of The Hope of Azure Springs. She started writing when her children began begging her for stories at night. She'd pull a book from the shelf, but they'd insist she make one up. Finally, she paired her love of good stories with her love of writing and hasn't stopped since. She lives with her husband and children on an island in the state of Washington.

▼▲
I'm the author/artist and I want to review Yours Truly, Thomas.
Back
Back