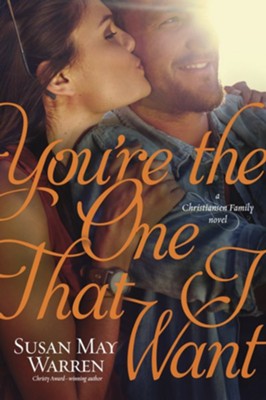 Owen Christiansen’s injury ended his NHL career.  He lands a job on an Alaskan crabbing boat. Scotty McFlynn, is the captain’s daughter and accustomed to being one of the guys, who never relies on anyone, and doesn’t believe in happily ever after. Casper Christiansen arrives to bring his brother home, accompanied by family drama of news that Casper is wanted for questioning in connection to a crime back in Minnesota. Owen and Scotty discover a truth when she escorts both brothers to Deep Haven as part of her new job on the Anchorage police force.  Scotty begins to see potential for a happy ending when she starts to enjoy an unfamiliar world of family, faith, and fresh starts.

▼▲
Owen Christiansen has been in a downward spiral since an injury ended his NHL career. But a job on an Alaskan crabbing boat offers a fresh start . . . maybe even a shot at romance with Elise “Scotty” McFlynn, the captain’s daughter.

Used to being one of the guys, to never relying on anyone, Scotty doesn’t believe in happily ever after—especially with someone like Owen. Her instinct is confirmed when Casper Christiansen arrives to drag his prodigal brother home, bringing with him a truckload of family drama—and even worse, the news that Casper is wanted for questioning in connection to a crime back in Minnesota.

But Owen is more than the sum of his mistakes, a truth both he and Scotty discover when she escorts both brothers to Deep Haven as part of her new job on the Anchorage police force. Thrust into an unfamiliar world of family, faith, and fresh starts, Scotty begins to see potential for a happy ending . . . if she’s brave enough to embrace it.

▼▲
No-nonsense police officer Scotty McFlynn is “just one of the guys” on her captain father’s old crabbing boat in Alaska. Admittedly not the marrying type, she protects her sensitive heart with an icy shield, never allowing herself to grow close to anyone. The arrival of Owen Christiansen, however, starts to melt away her defenses, and she finds herself falling for the charming man on the run from his past. When their lives are suddenly jeopardized onboard, they realize there is more between them than simply being shipmates. They both survive, sharing secrets and a marriage proposal in the process. When Scotty fulfills her promise to Owen to go back with him to the Christiansen home in Deep Haven, Minn., she finds herself mixed up in clearing Owen’s brother’s name in a murder drama. After her stay with the Christiansen family lasts longer than expected, Scotty must choose which life she really wants. Warren (The Wonder of You) has shaped a beautifully dynamic romance that teaches the value of family and forgiveness through a modern-day prodigal-son story of redemption.
Warren’s Minnesota-set Christiansen Family series, including Always on My Mind and The Wonder of You (both 2015), draws to a close with this tale. The focus here is on Owen, the troubled youngest brother of the boisterous, fiercely loyal clan, as he attempts to make amends. Far from home, Owen is part of an Alaskan fishing crew when he begins to develop feelings for Scotty, the captain’s daughter and one tough crew member. A near-death experience draws them together, but both are afraid of opening up old wounds. Owen’s brother, Casper, tracks him down, and all three return to the Christiansen home in Deep Haven. Things are complicated as Owen deals with the consequences of his reckless past and Scotty learns how to trust others. Devoted fans of Warren’s series will love this prodigal-son story, as will new readers. Everyone can relate to the characters’ constant struggles to be more than the sum of their past mistakes, and readers will warm to the grace and hope that propel the growing love between Owen and Scotty.

▼▲
I'm the author/artist and I want to review You're the One That I Want #6.
Back
Back