Your Marriage Can Survive a Newborn - eBook
By: Glenn Williams, Natalie Williams 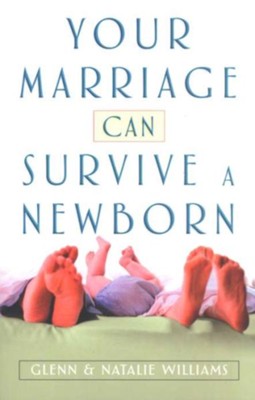 Your Marriage Can Survive a Newborn - eBook

▼▲
Are you a prospective parent? Be prepared for the "baby-bomb"-the effects of a newborn upon your marital relationship-with tips from those who've been there. Learn how to strengthen your marriage as you face one of the most challenging times of your life: parenthood!

▼▲
Your Marriage Can Survive a Newborn by Glenn and Natalie Williams reveals exactly how to salvage a marriage being torn apart by a third party. The demanded attention from this couples first child placed insurmountable stress upon their marriage, not to mention the ways in which their social lives and family relationships were affected. They had to find a way to become close again in order to save the relationship. Both authors share heartfelt expressions of what it cost them to be parents, as they reveal intimate emotions and personal details of their experience after a new addition to the family, with the hope that their lessons will help others.
Natalie writes, I also grieved how my relationship with Glenn had changed. At times we simply didnt feel we had anything left to channel into our relationship. Our conflicts only increased the grief I felt at the loss of our relationship as it had once been.
Glenn and Natalie reassure readers that a marriage can survive the stresses of a new addition, and the effect it has on the household budget. Each chapter reveals the individual stages they each went through, and at the end of each chapter the authors offer quick tips to help others avoid problems that they themselves experienced. Glenn is a psychologist and Natalie is an occupational therapist, and they now have three children. The first baby became the center of their purpose for living. Ben wrote, At times like this, our conversation deteriorated and dialogue became a tit for tat.
Family members and friends tried to help. They eventually learned that their parents advice had been right, after going through anxiety, stress, and frustration that could have been avoided. The most unforgettable experience was when Glenns mother was dying just prior to the birth of their first child, Ben, and they were afraid that she might not live to ever see him. After Ben was born, they not only had to deal with not getting enough rest and not having enough time for one another, but also with this untimely tragedy of his mothers decline. In the last few chapters, they share how their children have been a blessing, even though their marriage has never been the same. Looking back, it was all worth it. The end result was the bonding of their family.
Through the authors own personal testimonies, they vividly illustrate the parenting and early marital experience from a very humanly viewpoint that, in my opinion, anyone can comprehend and enjoy. Even the most intimate details were presented in a very tasteful manner. I, myself, found it to be very informative and enjoyable. This is a very interesting book, and not just for newlyweds and new parents. It brings back memories for those who have already been through the experience, but it should also be read by single individuals, and it could be viewed by some as a strong counseling or reference tool for young couples. -- Phyllis Harris, Christian Book Preivews.com

▼▲
I'm the author/artist and I want to review Your Marriage Can Survive a Newborn - eBook.
Back
×
Back
×