Skip to main content
The Young Refugees #2: The Search for the Silver Eagle
By: Ed Dunlop
Stock No: WW200220 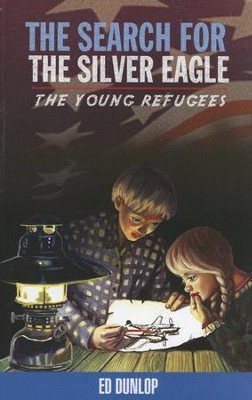 The Young Refugees #2: The Search for the Silver Eagle

▼▲
No longer safe in Switzerland, twelve-year-old Hans, his father and younger sister are pursued by the Nazis from Switzerland into France. They change their names to throw off the relentless pursuit of the Nazis. The family becomes involved in a daring rescue that could save France, their homeland--maybe even the free world, as they help the locals resist the Germans and rescue a downed American pilot. But the enemy covets the prize, forcing the three heroes and their friends into harrowing chases and narrow escapes. Recommended for ages 9 to 12.

▼▲
"Hans, Gretchen, and their father, who has escaped from his enforced service with the Third Reich, take the new surname, Von Edler, and move to Vichy France, a seemingly safe haven. Soon Vichy France falls to the Nazis and only their false surname protects them. An American pilot crashes nearby. The Von Edlers and their new friends manage to find and hide him before the Nazis capture him. Once again facing grave danger, Hans and Gretchen, aided by their Papa, French resistance fighters, and a secret agent, rescue an Allied top-secret aircraft gun from under the very noses of the Nazis.
"Firmly reinforcing his Young Refugee novels with historical, geographical, technical, and mountaineering data, Ed Dunlop delivers gripping, suspenseful, worthwhile fiction. The straightforward plots, well garnished with surprising twists and mysteries, simple, evocative wording, and interesting characterization quickly capture the readers imagination. Christian thought and principals grow naturally within the plot and include, among other things: how hate warps the Christian; prejudice; trust and prayer in desperate situations; the influence of absent parents; the interplay of cowardice, fear, and heroism; witnessing about Christ; accepting Christ as Savior; facing ones own imminent death; and, witnessing both Christian and non-Christian death of both children and adults. Written for nine through twelve year olds The Young Refugees series will be useful for both individual and group reading in church, school, or family. Since these books give voice to many of the frightening questions that arise in todays children, The Young Refugees are valuable discussion starters." -- Donna Eggett, Christian Book Previews.com

▼▲
I'm the author/artist and I want to review The Young Refugees #2: The Search for the Silver Eagle.
Back