Skip to main content
You Are So Wonderful
By: Jacqueline Janette Lewis
Illustrated By: Jeremy Tugeau
Stock No: WW463760 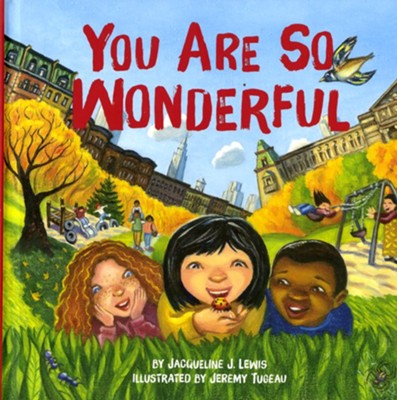 You Are So Wonderful

▼▲
You Are So Wonderful by Jacqueline J. Lewis and illustrated by Jeremy Tugeau is a wonderful celebration of a child's diversity and individualism. Beautifully illustrated with a heartwarming, rhyming text, this story encourages children to be mindful of their differences and to celebrate them, for they were so wonderfully made by God and there is no one else like them in the world! Recommended for ages 4 to 7 years. Includes a section in the back, "Reading Tips for Caregivers," that includes discussion questions for varying age ranges.

"You are so wonderful. This is true."

From your nose to your toes and your chin to your grin, God made you special, wonderful, and perfectly you. Featuring a diverse cast of children and adults playing and enjoying life in New York City's Central Park, this joyful picture book celebrates and affirms that every child is unique and deeply loved by God.

This updated and revised edition of You Are So Wonderful by Jacqueline J. Lewis, illustrated by Jeremy Tugeau, includes a new reading guide by teacher and educational consultant Gabrielle Deveaux.

Jacqueline J. Lewis is Senior Minister at Middle Collegiate Church, a 1,100-member multiracial, welcoming, and inclusive congregation in New York City. She is an activist, preacher, author, and fierce advocate for racial equality, economic justice, and LGBTQIA+ equality. Middle Church and Jacqui’s activism for these issues has been featured in media such as The TODAY Show, The Washington Post, The New York Times, The Wall Street Journal, Essence, and The Huffington Post.

Jeremy Tugeau is the illustrator of dozens of children’s books, including Who Were the Beatles and The Buddy Files series. He earned his master’s degree in art education from Case Western Reserve University and currently teaches high school art in Cleveland, Ohio. He lives with his wife and three children in a 100-year-old house on a hill.

▼▲
I'm the author/artist and I want to review You Are So Wonderful.
Back
Back