SHIPPING DELAYS & COVID-19 IMPACT - learn more
CYBER WEEK SALE: Up to 85% off, thru 12/7. >
Wurmbrand: Tortured for Christ, The Complete Story
By: The Voice of the Martyrs 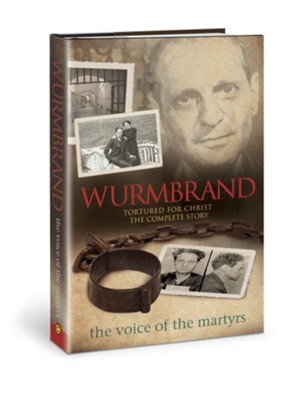 ▼▲
Discover the inspiring lives of Richard and Sabina Wurmbrand! Arrested by the Romanian police for illegally leading Christian worship and witnessing, Richard endured 14 years of prison and torture. His wife, Sabina, was subjected to two years of forced labor. But somehow they emerged neither melancholy nor embittered but with stories of victorious faith. 336 pages, hardcover from Cook.

▼▲
On February 29, 1948, Richard Wurmbrand was arrested by the secret police. His crimes? Leading Christian worship and witnessing—both of which were illegal under the atheistic Communist regime of Romania.

Richard spent fourteen years in prison. He was tortured, beaten, and locked into a  solitary confinement cell. Sabina Wurmbrand spent three years in a labor camp,nearly freezing to death as she and other prisoners worked on the Danube Canal. She was repeatedly told her husband had died behind bars.

But Richard and Sabina Wurmbrand had an unshakeable faith in Christ. Neither of them gave up hope, and neither of them would stop talking about Jesus.

Now, for the first time, both sides of this amazing story are told in one book. Wurmbrand tells of Richard and Sabina Wurmbrand, combining stories and research from the following books: The Pastor’s Wife, In God’s Underground, and Tortured for Christ. Your faith will be inspired as you go deep inside the darkest prison cells to see how the light of Christ continues to shine from the hearts of those totally committed to Him.

▼▲
The Voice of the Martyrs (VOM) is a nonprofit, interdenominational missions organization that offers practical and spiritual help to persecuted Christians around the world. Founded in 1967, VOM is dedicated to inspiring all believers to deepen their commitment to Christ and to fulfill His Great Commission no matter the cost.

▼▲
When I broke my neck in 1967 and became confined to a wheelchair, little did I realize that I would soon be reading a just-released Christian book that would impact my views about suffering for Christ. The book was Tortured for Christ, and my college-bound friends insisted I read it. They said it would help me come to grips with my own struggles to trust God in the midst of deep suffering and loss.

Up until the diving accident that caused my paralysis, I assumed God wanted His children to live happy, healthy lives that were free from trouble. But in reading Tortured for Christ, I realized that God's purpose in redeeming us is not to make life a soft bed of roses but to make us more like Jesus. Loss, grief, pain, and suffering are His choicest tools in accomplishing that goal.

Now, having lived fifty years in a wheelchair as a quadriplegic-as many years as Tortured for Christ has been used of the Lord-I can truthfully say that deep affliction in a Christian's life is what provides the most powerful platform for the success of the gospel. That is why I thank God for this remarkable book and its timeless message. - Joni Eareckson Tada, founder, Joni and Friends

Few stories outside the canon of Scripture have inspired so many to serve so faithfully. This story is a testimony of God's faithfulness and the exemplary service of His saints in the face of imprisonment, torture, and death, and God has used it to transform millions of people worldwide. Every Christian should read this book. - Cole Richards, president, The Voice of the Martyrs

I praise the Lord for the constant mercy and grace demonstrated through the lives of Richard and Sabina Wurmbrand. Their message greatly challenged my own heart. In the early years of Operation Mobilization, we carried many of Richard's books and prayed they would be greatly used by God, especially Sabina's book, The Pastor's Wife, as we felt a need to have more books appealing to women. We also praise God for Tortured for Christ, of which we distributed thousands of copies around the world.

In all the ways God used him, Richard continued to walk humbly and meekly, always ready to learn new lessons at Jesus's feet. Richard's testimony cut to the heart of sleeping Christians unaware of the suffering of other Christians. To this day, his testimony and legacy through The Voice of the Martyrs are still opening the eyes of Christians to their persecuted family. I believe God gave Richard a vision for the far reaches of the world, and that vision has not changed in fifty years. - George Verwer, founder, Operation Mobilization

Our dear Brother Wurmbrand hit us right in the heart with his example. Because of him, YWAM started smuggling Bibles into countries behind the Iron Curtain. It has been a great thing to partner with VOM in the kingdom, and we want to keep this ministry close to our hearts because the unity we are seeing is a wonderful love thing God has put within His family. Our focus at YWAM is keeping the Word of the Lord clearly before us, and we have been inspired by leaders such as Richard and Sabina. - Loren Cunningham, founder, Youth With A Mission (YWAM)

As a twelve-year-old pastor's daughter, my heart moved with pity as I read Tortured for Christ. I remember wondering if I would have Wurmbrand-type courage to endure hardship for the sake of the gospel. Although I do have my own captivity story, I have never shared in the sufferings of Christ as the Wurmbrands did through imprisonment and torture, stripped of all earthly possessions. All these years later, I am reminded there is no pity in the heart of the Enemy of our souls. Now as then, he stalks around like a wild beast seeking someone to devour. But the Enemy has not gained a victory in these stories! These brave redeemed ones-detested on earth-now join in a wondrous chant on high: "Unto Him that loved us and washed us from our sins, to Him be glory and dominion forever and ever. Amen." May we find courage within these pages to live heroically as Richard and Sabina did, until we join them in their magnificent song!- Gracia Burnham, New Tribes Mission, author, In the Presence of My Enemies

Although Richard and Sabina Wurmbrand were born more than a hundred years ago, their timeless story has a freshness and timeliness that comes through clearly in these pages. Yes, they were heroes for the gospel during the Cold War days, when the West was fighting Communist expansion. But they are heroes for our day too, demonstrating with their lives a love and commitment to Christ that would not be swayed or diminished by pressure, persecution, or pain. The first time Richard's and Sabina's stories are both contained within one cover, this book contains a wealth of insight into the lives of these two heroes of the faith. Their story challenges all of us to "go and do likewise" as we boldly live out our own walk of faith with Jesus. - Todd Nettleton, host, VOM Radio (VOMRadio.net)

In my close association with persecuted Christians-serving them and serving with them on the world's most difficult and dangerous missions frontiers in more than fifty nations-I have witnessed the power of Richard and Sabina's testimony. Few stories outside the canon of Scripture have inspired so many to serve so faithfully. And when we consider how the Wurmbrands' story has challenged Western Christians to a deeper commitment to Christ, His church, and His Great Commission, it is easy for us to see that this is one of the most important Christian biographies in history. Wurmbrand is much more than a historical record detailing the lives of two Christians who experienced atrocities at the hands of Romanian communists. This story is a testimony of God's faithfulness and the exemplary service of His saints in the face of imprisonment, torture, and death, and God has used it to transform millions of people worldwide. Every Christian should read this book. - Cole Richards, president, The Voice of the Martyrs

▼▲
I'm the author/artist and I want to review Wurmbrand: Tortured for Christ, The Complete Story.
Back
×
Back
×