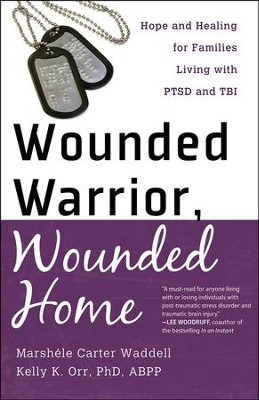 ▼▲
Wounded Warrior, Wounded Home offers a hope-filled way forward, giving hurting families a look inside the minds and hearts of combat veterans and guiding them to develop their own plan for physical. amotional, and spiritual wholeness.

▼▲
For every wounded warrior, there is a wounded home--an immediate and extended family and community impacted by their loved one's war experiences. Every day service members are returning from combat deployments to their families. And every day war comes home with them.

When a combat veteran struggles with post-traumatic stress disorder (PTSD) and/or traumatic brain injury (TBI), every member of the family experiences the effects. Spouses, parents, and children must undergo changes on the home front, a process that resembles the phases of grief. Confusion, hurt, anger, guilt, fatigue, and fear lie behind their brave smiles and squared shoulders.

Wounded Warrior, Wounded Home gives hurting families a look inside the minds and hearts of wounded warriors and guides them in developing their own personal plan for physical, emotional, and spiritual wholeness in the wake of war. The authors, one the wife of a career US Navy SEAL and the other a clinical psychologist and Vietnam veteran, speak from their own experiences of living with PTSD and TBI. They also share insights from dozens of families and careful research, offering readers a hope-filled way forward.

▼▲
Marsh&eacute;le Carter is the coauthor of When War Comes Home and the author of Hope for the Home Front. She and her former husband of more than 30 years, a U.S. Navy SEAL, along with their three children, experienced many lengthy separations and frequent deployments for combat duty, special operations training, and real-world conflicts during a 25-year military career. From 2002-2015 Marsh&eacute;le served as founder and president of Hope for the Home Front, a nonprofit that provided resources, conferences, and community to women whose lives are connected to combat veterans with PTSD and TBI. She has been featured in international, national, and local media including The Diane Rehm Show on National Public Radio (NPR), Time magazine, the BBC, Los Angeles Times, the Huffington Post, the Washington Post, and Fox News. Marsh&eacute;le completed her MA in mass communication/strategic corporate communication at UNC's School of Media and Journalism in 2014.

Kelly K. Orr, PhD, ABPP, has more than 30 years experience in behavioral medicine and pain management. He serves on the advisory council and speaking team of Hope for the Home Front. Dr. Orr completed his PhD in Clinical Psychology at Biola University, Rosemead School of Psychology in 1978. He reentered military service with the Air Force in 1987 and retired in 2004 with a combined USMC and Air Force career of 25 years. He now makes his home in Colorado Springs with his wife Kathy, enjoying the mountains, hiking, fishing, and spending time with his eight grandchildren.

▼▲
I'm the author/artist and I want to review Wounded Warrior, Wounded Home: Hope and Healing for Families Living with PTSD and TBI.
Back
Back