Skip to main content
SPRING CYBER EVENT STARTS NOW: And it's a really BIG deal! Up to 88% off through 5/24>
Wounded Angels: Sometimes the Only Way to Heal a Broken Heart Is Through a Wounded Soul
By: Chuck Miceli
Stock No: WW698641 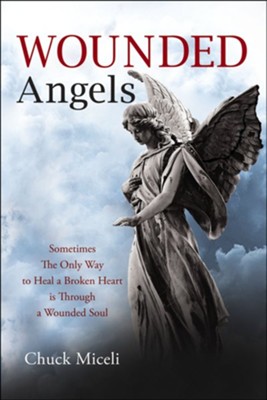 Wounded Angels: Sometimes the Only Way to Heal a Broken Heart Is Through a Wounded Soul

On a sweltering Fourth of July, the suicide of fourteen-year-old Maureen Bower’s father shatters her security. She fears that eventually, everyone she loves will abandon her.

With the words, "May I have this dance," Frank Russo introduces himself to Maureen at a roller-skating rink. As he teaches her skate dancing, she falls deeply in love with him. Meanwhile, the country advances further into World War 2. They wait until they feel it is safe to marry only to return from their honeymoon to find Frank’s draft notice. He leaves for the Pacific and is gone for the next three years. When Frank’s best friend, Harvey, dies at Normandy, Maureen’s closest friend, June, walks out of her life too.

Frank returns from the war physically and emotionally scarred, Maureen does her best to mend him until their first child’s birth hastens his recovery. They share rich experiences, develop close friendships, raise two daughters and eventually welcome the young women’s husbands into their lives. When their children move from Brooklyn, New York to suburban Connecticut, Frank and Maureen follow and become active volunteers at the Bristol Senior Center. On the night of Lieutenant William Calley’s conviction for the Mai Lai Massacre however, Frank is overcome with guilt. When he confesses his own wartime atrocities to Maureen, she struggles to understand the man she thought she knew.

Through fifty-plus years of marriage, Frank becomes the center of Maureen’s world until his sudden death shatters her faith and rekindles her deep fear of abandonment. She can’t escape from the crushing loneliness. Friends, family and even ministers are helpless to lift her from her depression. Maureen finds tasks like driving a car, paying the bills, even cleaning the house overwhelming and her smallest joy feels like a betrayal to Frank. As she prepares to end her suffering, help comes from the unlikeliest of sources: Doris Cantrell. Following an abusive childhood, a troubled marriage and estrangement with her own daughter, Doris is as damaged as is Maureen. The mistreatment she inflicts on others evidences her contempt, yet underneath it all, Maureen senses a deep sadness.

Doris refuses to sympathize with Maureen’s plight and persists in exposing her to different experiences and new ways of living. Maureen also refuses to accept that Doris’s past gave her the right to abuse people in the present or to neglect her bond with her daughter. Both women lack the strength or will to help anyone. Nevertheless, God has His own plan for these wounded angels. The inconsolable widow and the uncontrollable social misfit manage to support and help heal each other. They do this, not despite their brokenness, but because of it. Maureen and Doris become close friends.

As Maureen heals, the widower, Larry Kowalski, reenters her life. Through their shared experiences of love and loss, they fall deeply in love. However, will her daughters understand her being with another man? In addition, can Maureen’s friendship with Doris survive her love for Larry?

Chuck Miceli has authored a textbook, government monographs, nationwide courses and two novels. He is a playwright and an award-winning poet. He has published articles, poems and short stories in magazines and literary journals. Chuck is past president of the Osher Lifelong Learning Institute at UCONN and was a poetry group coordinator at the Southington Care Center. The son of a Pennsylvania coal miner, he grew up in Brooklyn New York and now lives with his wife, Judy, in suburban Connecticut.

▼▲
Wounded Angels is an incredible, phenomenal and breathtaking story that is immersive and full of detailed world and character building so I, of course, have to award the stellar read an excellent five stars! So please, do read this book, book lovers and get lost in an incredible story as it will entertain you from beginning to end and leave a lasting impression. -- RedHeadedBookLover.com

Wounded Angels focuses on a grieving widow who finds an unlikely second chance to embrace life. This tale opens on a memorably stark note: the moment when 14-year-old Maureen Bower's working-class father leaves their family and commits suicide. In a particularly jarring scene, she's actually the one who discovers his body hanging from a tree in Highland Park. Naturally enough, the incident scars her psychologically, deepening her fear of abandonment until she meets a confident and high-spirited man named Frank Russo, who asks her to dance at the Cypress Avenue Roller Rink. Frank, a vibrant figure who, a character says, 'could never be just another face in the crowd,' brings complicated vigor to Maureen's life... When Frank dies, the wounds of losing her father are reopened, and she withdraws from society. Her unhealthy isolation is shattered by her deepening friendship with an unconventional woman named Doris Cantrell, whose outsized personality has developed as a response to her own psychological traumas while growing up. Doris is abrasive and outspoken, and although she's kind in her gruff way, she shows little patience for Maureen's... ongoing bereavement. From the beginning, Maureen senses hidden dimensions in Doris... Miceli skillfully charts the deepening of this odd friendship, with Doris and her own familial strife serving to draw Maureen out of a downward spiral that may well have had her following her father's dark path. The fine emotional gradations in the deepening friendship between the two women are smoothly handled and boldly venture into dramatic territory seldom dealt with in contemporary fiction. A straightforward, engaging tale about finding a meaningful friendship late in life. -- Kirkus Reivew

Wounded Angels is the love story of Frank and Maureen Russo, two young people who meet and fall in love at a skating rink in New York City just before the outbreak of World War II. Maureen Bower is a product of the Great Depression, a young woman whose early life was rocked by the ruin and suicide of her beloved father... Frank and Maureen's relationship deepens and develops over time. They move to Connecticut and look forward to a long, happy retirement when the worst happens... Abandoned again, Maureen sinks into a deep depression... She is lost -- until she discovers an unlikely friend in spit-fire Doris Cantrell, a woman whose drifting, hard-loving lifestyle differs greatly from Maureen's own. Miceli's story of love, loss, and recovery unwinds like a tale told during a long afternoon's visit over a cup of coffee and the reader reaches the final page reluctantly, feeling as though they are leaving a new-found, long-sought friend. It is moving, heartbreaking, and ultimately uplifting, and yet there is nothing truly remarkable about Frank and Maureen's story. They are like many couples all over the nation: hardworking, loving, ordinary people leading ordinary lives with ordinary problems. And yet that in itself is the charm and the magic of this tale: it dives deep into the often overlooked lives of the ordinary and finds the extraordinary. Miceli's light and often humorous touch is much in the manner of Erma Bombeck or Frank Capra and his world feels whole, real, and fully realized... Wounded Angels is about imperfect people in an imperfect world, learning truths about love, loss, and beginning again. It will leave the reader satisfied and with a sense of hope, a truly fine story told in a loving, thoughtful manner. -- Killarney Traynor Review

Wounded Angels by Chuck Miceli is a novel that is both emotionally and psychologically rich, a story of two souls that have been deeply wounded and a journey towards healing that is filled with mystery. Maureen Bower is just fourteen when her father abandons her. But then Frank Russo comes into her life and makes her feel loved, standing by her on every challenge and supporting her through difficult moments and complications from family and the devastating sense of loss, and separation. But what if Frank also abandons her? Maureen's thoughts on abandonment usher her into a deep depression and no one seems to have a strong and positive effect on her. The path of healing might be in Doris Cantrell, a woman who has suffered abuse in childhood, has experienced a failed marriage and been estranged from her daughter. The connection between Maureen and Doris might bring the healing that both of them deserve. Intelligently imagined and deftly written, Wounded Angels is a book that will speak to the reader's heart. The sense of pathos is very strong as the reader watches the characters struggle with the reality of emotional pain. Chuck Miceli's book reflects the reality of the human heart, exploring themes of depression, loss, family, love, and healing. The characters are richly developed and each has strong emotional depth. It isn't difficult to identify with Maureen and to imagine the pain that she goes through after her experience of abandonment. I quickly learned to love this character and wanted to see what eventually becomes of her. The prose is gorgeous, the plot strong and the storytelling craft so refined that readers can't help feeling as though they are part of the world of the characters, thanks to the humanity of these characters and the realism of the writing. -- Reader's Favorite

▼▲
I'm the author/artist and I want to review Wounded Angels: Sometimes the Only Way to Heal a Broken Heart Is Through a Wounded Soul.
Back
Back