Gods of this World: A Philosophical Discussion and Defense of Christian Demonology
By: Shandon L. Guthrie 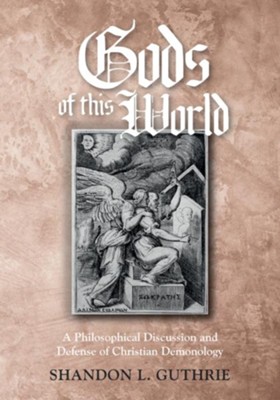 Gods of this World: A Philosophical Discussion and Defense of Christian Demonology

Philosophers of religion have focused almost exclusively on the existence and nature of God and the nature and destiny of human beings. But these philosophers have been remiss in engaging discussions about the possibility of there being adverse gods of this world (demonic beings) despite being a doctrine that comprises a significant part of the Christian confession. This drought in the literature has left a number of questions unaddressed, including:

Hasn’t science buried the demonic?
Are there any successful philosophical arguments for the existence of Satan?
What kind of being is Satan? Is he the fallen angel of lore?
Is it reasonable for Christians to say that demons are purely immaterial spirits?
Can demons causally interact with the physical world and its inhabitants?
Can demons perform diabolical miracles?

Shandon Guthrie broaches new territory beginning with a rigorous defense for the existence of Satan and his cohorts. He then advances and defends a model for how to understand their nature in terms of their ontology and causal powers. No other book has attempted a full-fledged natural diabology on behalf of Christian orthodoxy. This is a must-read for anyone interested in the dark side of Christian theology and metaphysics.

▼▲
I'm the author/artist and I want to review Gods of this World: A Philosophical Discussion and Defense of Christian Demonology.
Back
×