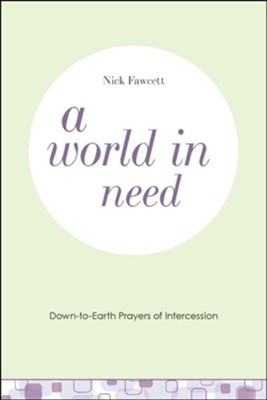 A World in Need: Down-to-Earth Prayers of Intercession

Prayer can seem like a closed book to many. God can feel remote from daily life and thus hard to communicate with. A World in Need approaches things from a different perspective, exploring through down-to-earth prayers how he can speak in the most ordinary of experiences and so help us to respond in turn.

Brought up in Southend-on-Sea, Essex, Nick Fawcett served as a Baptist minister for 13 years, and as a chaplain with TocH for 3, before deciding to focuson writing and editing, which he continues with today, despite wrestling with myeloma, an incurable cancer of the blood. He lives in Wellington, Somerset, with his wife, Deborah, and - when they are at home from university - his two children, Samuel and Kate. Delighting in the beauty of the West Country, Nick and Deborah love nothing more than walking stretches of the South West coast path at weekends, and Nick - as well as finding time for online games of chess and Scrabble alongside his many editing commitments - finds constant inspiration for his numerous books in the lanes and footpaths near his house. His aim, increasingly, is to write material free of religious jargon that reaches out to people of all faiths and none.

▼▲
I'm the author/artist and I want to review A World in Need: Down-to-Earth Prayers of Intercession.
Back