Life in Year One: What the World Was Like in First-Century Palestine - eBook
By: Scott Korbb 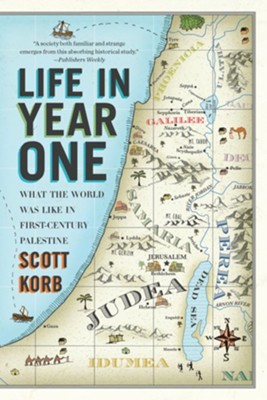 Life in Year One: What the World Was Like in First-Century Palestine - eBook

▼▲
What was it like to live in the time of Jesus?

What did people eat? Whom did they marry? How did they keep themselves clean? What did their cities and towns look like? What did they believe?

The answers, it turns out, are surprising. This simple question is not so simple after all. With a historian's insight and a reporter's curiosity, Scott Korb gives us a backstage pass to the unexpected and sometimes down-and-dirty truth about what everyday life was like in first-century Palestine, that tumultuous era when the Roman Empire was at its zenith and a new religion-Christianity-was born.

▼▲
For anyone who's ever pondered what everyday life was like during the time of Jesus comes a lively and illuminating portrait of the nearly unknown world of daily life in first-century Palestine.

What was it like to live during the time of Jesus?

Where did people live?

Who did they marry?

How did people survive?

These are just some of the questions that Scott Korb answers in this engaging new book, which explores what everyday life entailed two thousand years ago in first-century Palestine, that tumultuous era when the Roman Empire was at its zenith and a new religion-Christianity-was born.

Culling information from primary sources, scholarly research, and his own travels and observations, Korb explores the nitty-gritty of real life back then-from how people fed, housed, and groomed themselves to how they kept themselves healthy. He guides the contemporary reader through the maze of customs and traditions that dictated life under the numerous groups, tribes, and peoples in the eastern Mediterranean that Rome governed two thousand years ago, and he illuminates the intriguing details of marriage, family life, health, and a host of other aspects of first-century life. The result is a book for everyone, from the armchair traveler to the amateur historian. With surprising revelations about politics and medicine, crime and personal hygiene, this book is smart and accessible popular history at its very best.

▼▲
Scott Korb is the co-author of The Faith Between Us: A Jew and a Catholic Search for the Meaning of God. He received his undergraduate degree from the University of Wisconsin and graduate degrees from Union Seminary and Columbia University. He has written for Harper's, Gastronomica, the Revealer, and Commonweal. He lives in Brooklyn, N.Y.

▼▲
I'm the author/artist and I want to review Life in Year One: What the World Was Like in First-Century Palestine - eBook.
Back
×
Back
×