Skip to main content
The Lost World of the Israelite Conquest: Covenant, Retribution, and the Fate of the Canaanites
By: John H. Walton, J. Harvey Walton
Stock No: WW851843 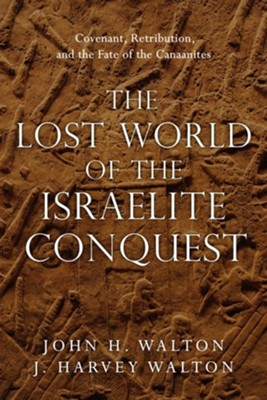 The Lost World of the Israelite Conquest: Covenant, Retribution, and the Fate of the Canaanites

Both Christians and skeptics struggle with the God that seems to be described in the Old Testament. Often these struggles revolve around questions such as: “Do the so-called holy war texts portray a divinely inspired genocide?” “Did God command the Israelites to slaughter the Canaanites?” If so, “How can Christians worship such a God?” In The Lost World of the Israelite Conquest, John H. Walton and J. Harvey Walton analyze the way these difficult passages have been translated and interpreted over time in an attempt to recalibrate our perceptions and reframe our questions to reveal new insights about the Israelite conquest narratives. This book provides readers with a serious analysis of the Hebrew Bible in its ancient context and culture and creates a fresh look at this age-old problem, providing its readers with a new way of interpreting the many issues involved.

Holy warfare is the festering wound on the conscience of Bible-believing Christians. Of all the problems the Old Testament poses for our modern age, this is the one we want to avoid in mixed company.

But do the so-called holy war texts of the Old Testament portray a divinely inspired genocide? Did Israel slaughter Canaanites at God's command? Were they enforcing divine retribution on an unholy people? These texts shock us. And we turn the page. But have we rightly understood them?

In The Lost World of the Israelite Conquest, John Walton and J. Harvey Walton take us on an archaeological dig, excavating the layers of translation and interpretation that over time have encrusted these texts and our perceptions. What happens when we take new approaches, frame new questions? When we weigh again their language and rhetoric? Were the Canaanites punished for sinning against the covenanting God? Does the Hebrew word herem mean "devote to destruction"? How are the Canaanites portrayed and why? And what happens when we backlight these texts with their ancient context?

The Lost World of the Israelite Conquest keenly recalibrates our perception and reframes our questions. While not attempting to provide all the answers, it offers surprising new insights and clears the ground for further understanding.

John H. Walton (PhD, Hebrew Union College) is professor of Old Testament at Wheaton College and Graduate School. Previously he was professor of Old Testament at Moody Bible Institute in Chicago for twenty years. Some of Walton's books include The Lost World of Adam and Eve, The Lost World of Scripture, The Lost World of Genesis One, Ancient Near Eastern Thought and the Old Testament, The Essential Bible Companion, The NIV Application Commentary: Genesis and The IVP Bible Background Commentary: Old Testament (with Victor Matthews and Mark Chavalas). Walton's ministry experience includes church classes for all age groups, high school Bible studies and adult Sunday school classes, as well as serving as a teacher for "The Bible in 90 Days." John and his wife, Kim, live in Wheaton, Illinois, and have three adult children.


J. Harvey Walton (MA, Wheaton College Graduate School) is a researcher in biblical studies and has contributed to a variety of publications. He is pursuing graduate studies at St. Andrews University.

"The Waltons have a provocative thesis that revises many popular and traditional views. They are attentive students of the Bible and its ancient context, and their argument is detailed. Bible readers who have wrestled with the implications of the conquest will find this work helpful."

▼▲
I'm the author/artist and I want to review The Lost World of the Israelite Conquest: Covenant, Retribution, and the Fate of the Canaanites.
Back
Back