Skip to main content
The Lost World of Genesis One: Ancient Cosmology and the Origins Debate
By: John H. Walton
Stock No: WW837045 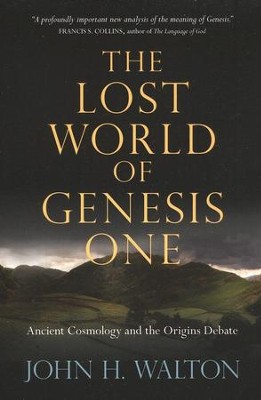 The Lost World of Genesis One: Ancient Cosmology and the Origins Debate

▼▲
Using 18 formal propositions John H. Walton constructs a compelling, provocative and original interpretation of Genesis 1. He argues that Genesis 1 is, as Bruce Waltke states, "a functioning temple where God takes up his residence as his headquarters from which he runs the world" not a description of the material origins of the universe. Additionally, Walton uses his thesis to directly engage the discussion of origins in the public square (schools and public policy) and ongoing academic debates in Science and Theology.

In this astute mix of cultural critique and biblical studies, John H. Walton presents and defends twenty propositions supporting a literary and theological understanding of Genesis 1 within the context of the ancient Near Eastern world and unpacks its implications for our modern scientific understanding of origins.

Ideal for students, professors, pastors and lay readers with an interest in the intelligent design controversy and creation-evolution debates, Walton's thoughtful analysis unpacks seldom appreciated aspects of the biblical text and sets Bible-believing scientists free to investigate the question of origins.

John H. Walton is professor of Old Testament at Wheaton College. He has written many books on the Old Testament and its ancient Near Eastern background, including a commentary on Genesis, Ancient Israelite Literature in Its Cultural Context and (as coauthor) The IVP Bible Background Commentary: Old Testament.

▼▲
This book presents a profoundly important new analysis of the meaning of Genesis. Digging deeply into the original Hebrew language and the culture of the people of Israel in Old Testament times, respected scholar John Walton argues convincingly that Genesis was intended to describe the creation of the functions of the cosmos, not its material nature. In the process, he elevates Scripture to a new level of respectful understanding, and eliminates any conflict between scientific and scriptural descriptions of origins.
-Francis S. Collins,
Head of the Human Genome Project and author of The Language of God

Walton's cosmic temple inauguration view of Genesis 1 is a landmark study in the interpretation of that controversial chapter. On the basis of ancient Near Eastern literatures, a rigorous study of the Hebrew word bara' ('create'), and a cogent and sustained argument, Walton has gifted the church with a fresh interpretation of Genesis 1. His view that the seven days refers to the inauguration of the cosmos as a functioning temple where God takes up his residence as his headquarters from which he runs the world merits reflection by all who love the God of Abraham.
-Bruce Waltke,
Professor of Old Testament, Reformed Theological Seminary

Every theologian, every pastor, every Christian in the natural sciences, indeed, every Christian who loves the Bible must put aside all other reading material this minute and immediately begin to absorb the contents of John Walton's The Lost World of Genesis One. Walton closely examines Genesis 1 in light of ancient Near Eastern literature and offers a compelling case that the creation account is far more concerned with the cosmos being given its functions as God's temple than it is with the manufacture of the material structures of the earth and universe. In the process, he has blown away all the futile attempts to elicit modern science from the first chapter of the Bible.
-Davis A. Young,
Professor Emeritus of Geology, Calvin College, and coauthor of The Bible, Rocks and Time

John Walton offers a compelling and persuasive interpretation of Genesis, one that challenges those who take it as an account of material origins. His excellent book is must-reading for all who are interested in the origins debate.
-Tremper Longman III,
Author of How to Read Genesis, and Robert H. Gundry Professor of Biblical Studies, Westmont College

Professor Walton seeks to describe clearly and with ruthless honesty the nature and purpose of the biblical text in Genesis that is juxtaposed to the claims of modern science and scientism in the current debate over origins. His work will be welcomed by all those who seek to render to both the Scriptures and modern science the authority appropriate to each--while at the same time avoiding false or unnecessary stands on either side.
-Shirley A. Mullen,
President, Houghton College

John Walton's expertise in the Ancient Near Eastern sources enables him to shed a flood of new and unexpected light on the deeper meaning of Genesis 1. The Creator, Genesis is saying, designed heaven and earth as a great temple with the intention of coming to live in it himself--and the sabbath isn't just a nice break after the work is done, but the moment when he takes up residence in the world he has just made. The implications of this resonate right through the rest of the Bible. This is not just a book to invite 'creationists' to think differently; it is a book to help all Bible students read the whole of Scripture with fresh eyes.
-N. T. Wright,
Bishop of Durham

It will challenge many to hink about Genesis in the way Christian scholars have been championing for many years now---as an ancient document, speaking to people with an understanding of the world very different from our own. Hopefully, it will open the doors to a conversation that is long overdue.
-Douglas J. Becker,
Themelios, November 2009

Walton [brings] a fresh perspective that enlightens, enriches, and honors the biblical text. . . I recommend the book to anyone interested in the origins question and look forward to seeing how these ideas shape origins discussion of the future.
-Sean M. Cordry,
Perspectives on Science and Christian Faith, September 2010

▼▲
I'm the author/artist and I want to review The Lost World of Genesis One: Ancient Cosmology and the Origins Debate.
Back
Back