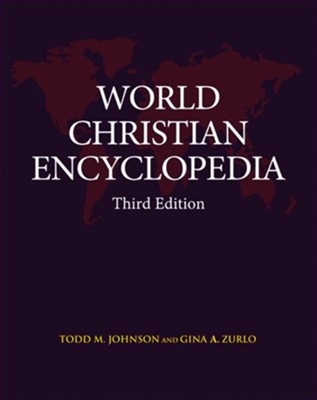 Out of Stock This product is no longer available and cannot be added to your cart. We apologize for this inconvenience
5 out of 5 stars for World Christian Encyclopedia, Third Edition (1 Review)
No longer available.
Stock No: WW403233
Edinburgh University Press / 2019 / Hardcover

▼▲
"Brilliantly produced and arranged, this will undoubtedly be a standard reference for years to come,"---Library Journal. "An impressive country-by-country, denomination-by-denomination, and year-by-year survey of most of the world's religions,"---New York Times. Accurate, up-to-date, ideal for libraries. 1100 pages, 9.75" x 12.25" hardcover.

▼▲
The World Christian Encyclopedia, now in its 3rd edition, documents the changing status of World Christianity over the past 120 years from historical and social scientific perspectives. It records the continued shift of Christianity to the Global South and contains estimates for religious and nonreligious affiliation in every country of the world, including detail on Christianity to the denominational level. This reference work features comprehensive descriptions of all Christian traditions, including current information on the uniqueness of Christian experiences around the world.

▼▲
Todd M. Johnson is Associate Professor of Global Christianity and Director of the Center for the Study of Global Christianity at Gordon-Conwell Theological Seminary in Boston, MA. Johnson is Associate Faculty at Boston University's Institute for Culture, Religion and World Affairs leading a research project on international religious demography. He has published encyclopedias, atlases, databases, monographs, and scholarly articles on counting religionists around the world.

Gina Zurlo is Assistant Director at the Center for the Study of Global Christianity at the Gordon-Conwell Theological Seminary, and Research Associate at the Institute on Culture, Religion and World Affairs. She was the project manager, researcher, and editor of The World's Religions in Figures: An Introduction to International Religious Demography (Wiley-Blackwell, 2013) and served as the Senior Editorial Assistant on the Atlas of Global Christianity (EUP, 2009).

▼▲
I'm the author/artist and I want to review World Christian Encyclopedia, Third Edition.
Back