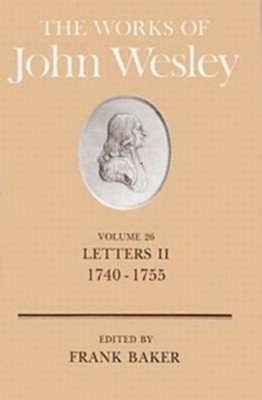 The second volume of letters in The Works of John Wesley, this text spans the years 1740-1755.

"This is the second of the seven volumes devoted to Wesley's correspondence.  It presents details about more than a thousand letters by three hundred persons, over four hundred being printed fully, and over three hundred by means of brief quotations, or by clues to their contents or purpose.  Almost two-thirds of the published letters are from Wesley's own pen.  Most of the remainder fill in the background or outcome of his letters, though a number have been selected for some other special significance.  More than one-fifth of the letters by Wesley are not available in Telford's edition.  The great bulk of the letters as a whole are presented in a carefully verified text (often for the first time) from the original holographs or other primary sources.  Footnotes to all Wesley's out-letters introduce his correspondents, elucidate references, and identify the sources of his frequent quotations.  The in-letters are annotated much more lightly.  The appendix (continued from the previous volume), lists all the known letters written or received by Wesley during the years 1740-55, along with details about the location of the text, whether in this volume or elsewhere." (from the Preface and Acknowledgements)