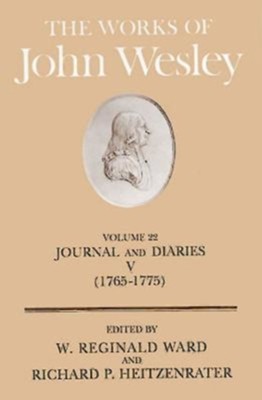 ▼▲
This edition of Wesley works in unique in combining extensive annotations with a critically prepared text of Wesley's writings. The international team of editors has set a new standard of scholarship in Wesley studies. Useable both by scholars and non-scholars, the reliable text of Wesley's writings presented in these volumes helps to reveal his continuing significance in the light of his own historical context.

▼▲
This is the fifth volume of Wesley's Journal to appear in the critical edition of The Work of John Wesley. Covering the decade from mid-1765 to the beginning of 1776, it contains four "Extracts" of Wesley's Journal (14-17) that document--in Wesley's own words--a significant period of growth and controversy in the Methodist movement. He describes in some detail the continuing spread of the revival into the farther reaches of the British Isles, the points of contention that threaten to disrupt the progress of the revival, his widening involvement in social issues such as the slave trade, the various attempts at union with the Church of England, and the spread of the Wesleyan movement to the American colonies.

▼▲
Richard P. Heitzenrater is William Kellon Quick Professor Emeritus of Church History and Wesley Studies at The Divinity School, Duke University, Durham, North Carolina; and General Editor of the Bicentennial Edition of The Works of John Wesley. He is also a member of the board of Kingswood Books. He lives in Durham, North Carolina.