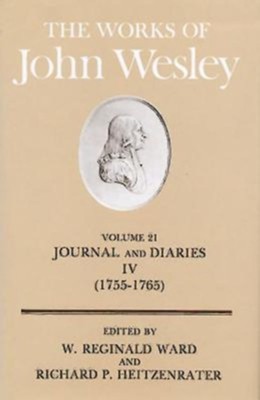 ▼▲
This edition of Wesley works in unique in combining extensive annotations with a critically prepared text of Wesley's writings. The international team of editors has set a new standard of scholarship in Wesley studies. Useable both by scholars and non-scholars, the reliable text of Wesley's writings presented in these volumes helps to reveal his continuing significance in the light of his own historical context.

This is the fourth volume of Wesley's Journal to appear in the critical edition of The Works of John Wesley. Covering the decade from early 1755 to the middle of 1765, it contains four "Extracts" from Wesley's Journal (10-13) that document--in Wesley's own words--a significant period of consolidation in the Wesleyan revival. He describes in vivid detail the growth of the Methodist movement, especially in the central portions of northern England as well as the spread into Ireland and Scotland.

This period contains several interesting controversies that help define the shape of Methodism and the nature of its relationship to the Church of England. Differences of opinion over the questions of lay preaching, ordination, sacraments, and doctrinal standards arise within the Methodist societies and represent the issues at the heart of a maturing organization that is stretching the limits of its self-conscious role within the Established Church. The doctrine of Christian perfection also provides the focus of another challenge to unity within the people called Methodists and increases the strain upon their relationship with the Church. The nature and manner of John Wesley's authority and leadership within the movement continues to be a controversial issue as the annual conferences become an important feature within the movement.

▼▲
Richard P. Heitzenrater is William Kellon Quick Professor Emeritus of Church History and Wesley Studies at The Divinity School, Duke University, Durham, North Carolina; and General Editor of the Bicentennial Edition of The Works of John Wesley. He is also a member of the board of Kingswood Books. He lives in Durham, North Carolina.

▼▲
I'm the author/artist and I want to review Works of John Wesley, Volume 21.
Back
×