SHIPPING DELAYS & COVID-19 IMPACT - learn more
CYBER WEEK SALE: Up to 85% off, thru 12/7. >
The Workbook on Abiding in Christ: The Way of Living Prayer
By: Maxie Dunnam 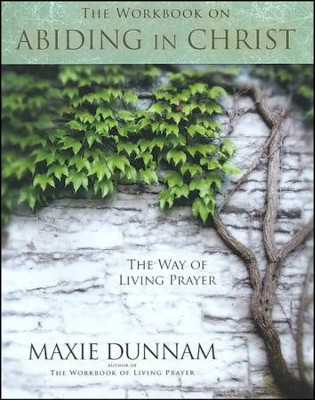 The Workbook on Abiding in Christ: The Way of Living Prayer

▼▲
If you would like to grow in your prayer life, join this 8-week exploration of what it means to abide in Christ. This workbook may be used in a small group setting or for individual use.

▼▲
In the 35 years since The Workbook of Living Prayer was published, Maxie Dunnam has come to see "the primary dynamic of living prayer is abiding in Christ."

In this new book, which is filled with rich scripture and intriguing stories from real life, Dunnam illustrates the biblical concept of abiding in Christ (John 15) and explains in practical terms how to experience this essential aspect of the authentic Christian life.

The workbook format consists of brief teaching segments, scripture, ideas for reflecting and recording, suggestions for taking what one learns in prayer time into the day, and guides for group sharing. By following Dunnam’s lead, readers do not simply read about prayer, they pray.

Quotes:
"The gracious invitation of Christ is ’abide in me.’ . . . It is a stupendous possibility, and should be the mark of normal Christian living."

"As unbelievable as it may appear on the surface, this is the heart of the Gospel: I am loved by God. My favorite way of stating it is there is a place in God’s heart that . . . only you can fill."

"Christianity is Christ. He came not only to save us from our sins, but to be an indwelling presence to shape us into his likeness."

▼▲
Maxie Dunnam is president emeritus of Asbury Theological Seminary in Wilmore, Kentucky. He served Asbury as chancellor for four years following his presidency, from 1994 to 2004. Dr. Dunnam came to Asbury after twelve years of ministry at the 6,000-member Christ United Methodist Church in Memphis, Tennessee.
Widely known among Methodists as an evangelist, small-group pioneer, and leader, Dunnam organized and pastored three Methodist churches before coming to The Upper Room as director of Prayer Life and Fellowship. He was world editor of The Upper Room daily devotional guide from 1975 to 1982. Under Dunnam's leadership, The Upper Room began its popular program The Walk to Emmaus.
A prolific writer, Dunnam is the author of more than forty books, including The Workbook of Living Prayer and many other workbooks. A past president of the World Methodist Council, he now serves on the executive board. He is also a member of the University Senate of The United Methodist Church. In "active retirement," he is the director of Kingdom Catalysts, a ministry that empowers transformational leadership.
Maxie and his wife, Jerry, reside in Memphis and are the parents of three grown children. They have four grandchildren. Maxie continues to travel widely and enjoys art shows and card games in his spare time.

▼▲
I'm the author/artist and I want to review The Workbook on Abiding in Christ: The Way of Living Prayer.
Back
×
Back
×