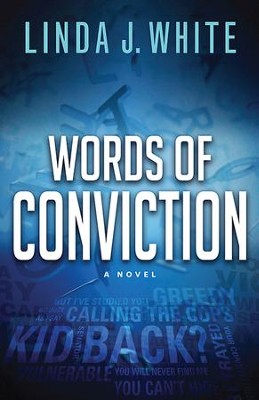 ▼▲
The clues are hidden in the kidnapper’s words. Can the message be decoded in time? When Zoe, the five-year-daughter of a powerful Senator, is abducted, the FBI brings in Special Agent MacKenzie Graham, a forensic psycholinguist, to analyze the written threats of the vengeful kidnapper. An expert at what she does, Kenzie probes criminal minds more accurately than she does her own heart. Working alongside fellow FBI agent John Crowfeather, Kenzie refuses to acknowledge her mysterious attraction to John, and continues to build walls she believes will protect her not only from men but God as well. John is no fan of hers, either, but they have little time to dwell on it as the case grows more dangerous. When the perpetrator begins posting messages on the Internet, the race is on to save Zoe. Can Kenzie and John rescue the girl before it’s too late? Or will their misguided convictions cost a little girl her life?

▼▲
Linda J. White is the author of FBI thrillers, including Seeds of Evidence and Bloody Point, both of which feature tactics and research made possible by her husband’s 25 years of service to the FBI Academy in Quantico, Virginia. The mother of three adult children, Linda also serves as the assistant editorial page editor of a daily newspaper in Somerville, Virginia, where she and Larry make their home. Find out more about the author at LindaJWhite.com.

▼▲
I'm the author/artist and I want to review Words of Conviction - eBook.
Back
×
Back
×