Skip to main content
CYBER WEEK ENDS SOON! Spot great deals up to 88% off. >
The Word of Promise, NKJV--Complete Bible on CD
Stock No: WW024130 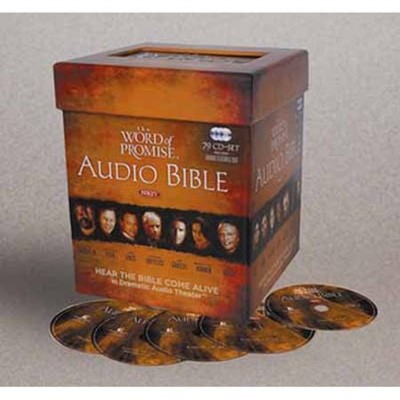 The Word of Promise, NKJV--Complete Bible on CD

This faithful rendering of the New King James Version® presents the Bible in more than 90 hours of compelling, dramatic audio theater format.

This world-class audio production immerses listeners in the dramatic reality of the Scriptures as never before with an original music score by composer Stefano Mainetti (Abba Pater), feature film quality sound effects, and compelling narration by Michael York and the work of over 500 actors.

The set includes an interactive Behind-the-Scenes DVD that includes actor interviews, worship resources, and a fascinating look at how dramatic audio theater is produced.

Q: Are some words left out like he said, she said or they said or any other words from the NKJV?

Yes, this is a dramatic presentation, not a word-for-word narration, so some phrases, such as, "he said" or "they shouted" are omitted. If you listen to the audio clip of Barabbas taking the place of Jesus you can hear an example of this.

Q: How are the tracks organized? I would like to know how the tracks are organized on both the MP3 version and the regular CD version of the Word of Promise Complete Audio Bible. Specifically, how easy/difficult is it to locate a specific passage when desired? Approximately how many verses are contained within each track or does each track contain a whole section of scripture say for example, Track 1 = Luke 2:1-3, Track 2 = Luke 2:4-7, Track 3 = Luke 2:8-12, etc.? Thanks!

The tracks in the "Word of Promise Audio Bible" are divided by chapter. Each track is a single chapter.

Q: Is this a literal translation of the NKJV, without any changes?

Yes, this is a word-for-word dramatization of the NKJV.

Q: On another web site "UNABRIDGED " was printed on the box. Does this specific item say unabridged? Bottom line: what would be the difference between an abridged and unabridged audio set? Thank YOU!

Yes, this is the complete Bible. It is unabridged.

Q: Summary after chapters, books, or stories? Is there some kind of elaboration or summarized after each chapter or story to further explain the passages, concepts, or stories by the narrator? Or is it just a word for word narration of the NKJV of the Bible?

No, there are no chapter or book summaries in this audio Bible. This edition featurs word- for- word NKJV narration and dramatization.

▼▲
I'm the author/artist and I want to review The Word of Promise, NKJV--Complete Bible on CD.
Back