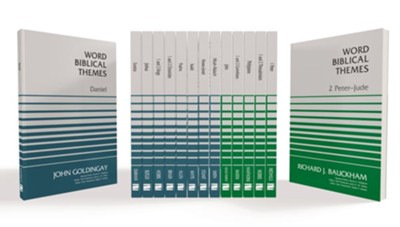 ▼▲
Commentaries help one grasp the meaning of a chapter or verse, but they are not usually designed to systematically trace major subjects within a given book of the Bible. Here, the widely acclaimed authors of the Word Biblical Commentary bring out the essence of major theological themes, adding plenty of teaching and preaching applications. 2032 pages total, softcovers.

A companion series to the acclaimed Word Biblical Commentary.

Finding the great themes of the books of the Bible is essential to the study of God's Word and to the preaching and teaching of its truths. These themes and ideas are often like precious gems: they lie beneath the surface and can only be discovered with some difficulty. While commentaries are useful for helping readers understand the content of a verse or chapter, they are not usually designed to help the reader to trace important subjects systematically within a given book a Scripture.

The Word Biblical Themes series helps readers discover the important themes of a book of the Bible. This series distills the theological essence of a given book of Scripture and serves it up in ways that enrich the preaching, teaching, worship, and discipleship of God's people.

Volumes in this series:

Volumes in the Word Biblical Themes: 15-Volume Set include:

Word Biblical Themes are an ideal resource for any reader who has used and benefited from the Word Biblical Commentary series, and will help pastors, bible teachers, and students as they seek to understand and apply God's word to their ministry and learning.

Gerald F. Hawthorne is Professor of Greek Emeritus, Wheaton College, Wheaton, Illinois, where he served on the faculty from 1953 to 1995. He is the author of The Presence and the Power: The Signficance of the Holy Spirit in the Life and Ministry of Jesus and editor, with Ralph P. Martin, of Dictionary of Paul and His Letters. He received the B.A. and M.A. degrees from Wheaton College and the Ph.D. from the University of Chicago.

Leon Morris (Ph.D. University of Cambridge) now in his retirement, was formerly Principal of Ridley College, Melbourne, and has served as Visiting Professor of New Testament at Trinity Evangelical Divinity School.

Dr. Ralph L. Smith is professor of Old Testament at Southwestern Baptist Theological Seminary in Ft. Worth, Texas. He has the Th.M. and Th.D. degrees from Southwestern, and has done post-doctoral studies at Harvard Divinity School and The University of Chicago. His previous books include Job: A Study of Providence and Faith, and Amos in The Broadman Bible Commentary.

Douglas Stuart is Professor of Old Testament and Chair of the Division of Biblical Studies at Gordon-Conwell Theological Seminary. He holds the B.A. and Ph.D. from Harvard University. Among his earlier writings are Studies in Early Hebrew Meter, Old Testament Exegesis: A Primer for Students and Pastors, and Favorite Old Testament Passages.

Leslie C. Allen is Professor of Old Testament at Fuller Theological Seminary. Formerly he was Lecturer in Hebrew, Aramaic and Judaism at London Bible College. He holds the MA degree from Corpus Christi College, Cambridge, in Classics and Oriental Studies. His PhD is from the University College of London, In Hebrew. Among his publications are The Greek Chronicles Parts 1 and 2 (supplements to Vetus Testamentum) and The Books of Joel, Obadiah, Jonah, and Micah for The New International Commentary on the Old Testament, as well as the section on Psalms 101-150 in the Word Biblical Commentary and Psalms in the Word Biblical Themes series.

Richard J. Bauckham is Lecturer in the History of Christian Thought at the Univeristy of Manchester, England. He holds the B.A., M.A., and Ph.D. degrees from the University of Cambridge. He has published articles in The Journal of Theological Studies, The Reformed Journal, Evangelical Quarterly, and Tyndale Bulletin, and is a specialist in the area of eschatology and apocalypticism

Dr. George R. Beasley-Murray is former Principal of Spurgeon’s College, London, and has served as James Buchanan Harrison Professor of New Testament Interpretation at Southern Baptist Theological Seminary in Louisville, Kentucky. He holds the M.A. from Cambridge University and the B.D., M.Th., Ph.D., and D.D. from the University of London. Among Dr. Beasley-Murray’s many important publications are Revelation in the New Century Bible Commentary, Baptism in the New Testament, Jesus and the Kingdom of God, Jesus and the Last Days, and Gospel of Life: Theology in the Fourth Gospel.

John I. Durham is Professor of Hebrew and Old Testament at Southwestern Baptist Seminary in Wake Forest, North Carolina. He has written widely on Old Testament themes, servicing as Consulting Editor for the Broadman Bible Commentary and writing the volumes on Psalms in that series. He has the Ph.D. from Oxford University and has done post-doctoral studies at Heidelberg, Oxford, Zurich, and Jerusalem.

John Goldingay is the David Allan Hubbard Professor of Old Testament at Fuller Theological Seminary.  He is the author of Old Testament Theology vol. 1 (2003), Walk On (2002), Men Behaving Badly (2000), To the Usual Suspects (1998), After Eating the Apricot (1996), Models for Interpretation of Scripture (1995), and Model for Scripture (1994), as well as commentaries on Daniel and Isaiah.

▼▲
I'm the author/artist and I want to review Word Biblical Themes, 15-Volume Set.
Back