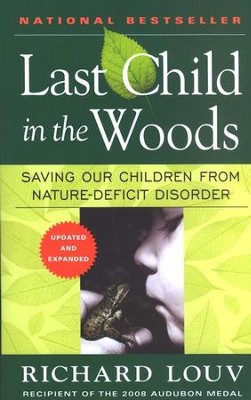 Last Child in the Woods: Saving Our Children from Nature-Deficit Disorder

▼▲
In this influential work about the staggering divide between children and the outdoors, child advocacy expert Richard Louv directly links the lack of nature in the lives of today's wired generation - he calls it nature-deficit - to some of the most disturbing childhood trends, such as the rises in obesity, attention disorders, and depression.

▼▲
The Book That Launched an International Movement

"An absolute must-read for parents." —The Boston Globe

"I like to play indoors better ’cause that’s where all the electrical outlets are," reports a fourth grader. But it’s not only computers, television, and video games that are keeping kids inside. It’s also their parents’ fears of traffic, strangers, Lyme disease, and West Nile virus; their schools’ emphasis on more and more homework; their structured schedules; and their lack of access to natural areas. Local governments, neighborhood associations, and even organizations devoted to the outdoors are placing legal and regulatory constraints on many wild spaces, sometimes making natural play a crime.

In Last Child in the Woods, Louv talks with parents, children, teachers, scientists, religious leaders, child-development researchers, and environmentalists who recognize the threat and offer solutions. Louv shows us an alternative future, one in which parents help their kids experience the natural world more deeply—and find the joy of family connectedness in the process.

Now includes
A Field Guide with 100 Practical Actions We Can Take&ensp;
Discussion Points for Book Groups, Classrooms, and Communities&ensp;
Additional Notes by the Author&ensp;
New and Updated Research from the U.S. and Abroad

▼▲
Richard Louv is a journalist and the author of ten books, including Last Child in the Woods: Saving Our Children from Nature-Deficit Disorder, The Nature Principle, and Vitamin N. Translated into twenty languages, his books have helped launch an international movement to connect children, families, and communities to nature. He is cofounder and chair emeritus of the nonprofit Children & Nature Network, which supports a new nature movement. Louv has written for the New York Times, Outside magazine, Orion Magazine, Parents, and many other publications. He appears regularly on national radio and TV, and lectures throughout the world. In 2008, he was awarded the Audubon Medal. Prior recipients have included Rachel Carson, E. O. Wilson, President Jimmy Carter, and Sir David Attenborough.

▼▲
"[The] national movement to ’leave no child inside’ . . . has been the focus of Capitol Hill hearings, state legislative action, grass-roots projects, a U.S. Forest Service initiative to get more children into the woods and a national effort to promote a ’green hour’ in each day. . . . The increased activism has been partly inspired by a best-selling book, Last Child in the Woods, and its author, Richard Louv." —The Washington Post

"Last Child in the Woods, which describes a generation so plugged into electronic diversions that it has lost its connection to the natural world, is helping drive a movement quickly flourishing across the nation." —The Nation’s Health

"This book is an absolute must-read for parents." —The Boston Globe

"An honest, well-researched and well-written book, . . . the first to give name to an undeniable problem." —The Atlanta Journal-Constitution

"One of the most thought-provoking, well-written books I’ve read in recent memory. It rivals Rachel Carson’s Silent Spring." —The Cincinnati Enquirer

"Important and original. . . . As Louv so eloquently and urgently shows, our mothers were right when they told us, day after day, ’Go out and play.’" —The Christian Science Monitor

"A single sentence explains why Louv’s book is so important: ’Our children,’ he writes, ’are the first generation to be raised without meaningful contact with the natural world.’ This matters, and Last Child in the Woods makes it patently clear why and lays out a path back." —The Ecologist

"The simplest, most profound, and most helpful of any book I have read on the personal and historical situation of our children, and ourselves, as we move into the twenty-first century." —Thomas Berry, author of The Dream of the Earth

▼▲
I'm the author/artist and I want to review Last Child in the Woods: Saving Our Children from Nature-Deficit Disorder.
Back
×
Back
×