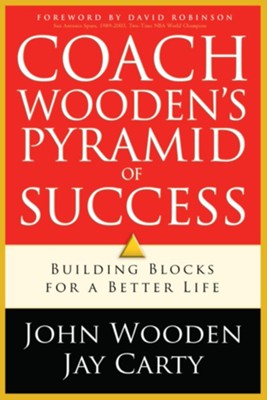 ▼▲
Legendary college basketball coach John Wooden and Jay Carty know that when it comes down to it, success is an equal opportunity player. Anyone can create it in his or her career, family, and beyond. Based on John Wooden's own method to victory, Coach Wooden's Pyramid of Success reveals that success is built block by block, where each block is a crucial principle contributing to lifelong achievement in every area of life. Each of these 32 daily readings takes an in-depth look at a single block of the pyramid, which when combined with the other blocks forms the structure of the pyramid of success. Join John Wooden and Jay Carty to discover the building blocks and key values--from confidence to faith--that have brought Coach to the pinnacle of success as a leader, a teacher, and a follower of God.

▼▲
John Wooden was a high school and college coach for forty years. During that time, his teams won more than 80 percent of their games. From 1948 to 1975, his UCLA Bruins teams claimed 10 NCAA national championships, including seven in a row, and at one time won 88 consecutive games. Wooden is in the Basketball Hall of Fame, both as a player and a coach. He originated the Pyramid of Success and was the coauthor with Jay Carty of the bestseller Coach Wooden One-on-One. Coach and his wife, Nellie, were married 53 years when she passed away in 1985. Coach lived to be 99 years of age, passing away on June 4, 2010.

JAY CARTY has played for the Los Angeles Lakers, coached basketball at his alma mater, Oregon State, and been a part of John Wooden's UCLA coaching staff. After hanging up his basketball shoes, Carty entered ministry. He has been a traveling preacher and the author of many books, including Playing with Fire, and the coauthor of Coach Wooden One-on-One and Darrell Waltrip One-on-One. Jay and his wife, Mary, live in California.

▼▲
I'm the author/artist and I want to review Coach Wooden's Pyramid of Success: Building Blocks For a Better Life - eBook.
Back
×
Back
×