Skip to main content
BIBLE SALE OF THE SEASON: For a Limited Time ~ Save on over 1,100 Bibles!
Women in Ministry: Four Views
Edited By: Bonnidell Clouse, Robert Clouse
By: Bonnidell Clouse & Robert G. Clouse, eds.
Stock No: WW1284 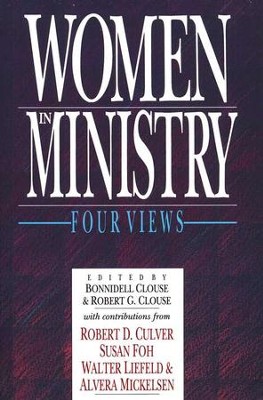 ▼▲
May women teach or exercise authority over men? Should they be ordained? Questions like these rage in the debate over women in ministry. Four committed evangelicals, Robert Culver, Susan Foh, Alvera Mickelsen, and Walter Liefeld, explain their positions and respond to the others, making for a lively exchange of ideas. Paper from InterVarsity.

Should women teach men? Should they exercise authority over men? What about ordaining women?

Even those who agree that Scripture must determine our answers do not agree on what it teaches. And too often differing sides have not been willing to listen to one another. This Spectrum Multiview volume shares the views of four deeply committed evangelicals that focus the discussion on the issues.

Robert Culver argues for what might be called the traditional view that women should not exercise authority over or teach men. Susan Foh suggests a modified view which would allow for women to teach but not to hold positions of authority. Walter Liefeld presents a case for plural ministry that questions ordination as a means of conferring authority. Alvera Mickelsen defends the full equality of men and women in the church. What makes this book especially helpful is that the writers all respond to the other essays, pointing out weaknesses and hidden assumptions.

Robert G. Clouse (PhD, University of Iowa) was professor emeritus of history at Indiana State University in Terre Haute, Indiana. He was also an ordained Brethren minister and served churches in Iowa and Indiana. His books include Meaning of the Millenium, Women in Ministry, War: Four Christian Views and Wealth and Poverty. He also wrote The New Millenium Manual (Baker), Two Kingdoms (Moody), The Story of the Church (Moody) and Puritans, the Millenium and the Future of Israel (Clarke, with Peter Toon).


Robert Culver (Th.M., Th.D., Grace Theological Seminary) has taught at Grace Theological Seminary, Wheaton College, Trinity Evangelical Divinity School and Northwestern College. He has also served as minister in the Fellowship of Grace Brethren Churches and the Evangelical Free Church. His published work includes numerous articles in books and periodicals as well as a major commentary, Daniel and the Latter Days, and a book on the Christian and the state titled Toward a Biblical View of Civil Government.


Susan T. Foh (M.A., Westminster Theological Seminary) has contributed articles and book reviews to various journals and the chapter "Abortion and Women's Lib" to the book Thou Shalt Not Kill: The Christian Case Against Abortion. She is also the author of Women and the Word of God: A Response to Biblical Feminism.


Liefeld (Ph.D., Columbia University) is professor emeritus of New Testament at Trinity Evangelical Divinity School in Deerfield, Illinois. He has also served as pastor of Christ Church in Lake Forest, Illinois. Among his several books are New Testament Exposition, Interpreting the Book of Acts and (cowritten with Ruth Tucker) Daughters of the Church.


Alvera Mickelsen has taught at Wheaton College and Bethel College, and has served as editor for Christian Life Magazine, The Conservative Baptist and David C. Cook Publications. In addition to numerous articles, her publications include Better Bible Study, Family Bible Encyclopedia, Understanding Scripture and Women, Authority and the Bible.

▼▲
I'm the author/artist and I want to review Women in Ministry: Four Views.
Back
Back