Skip to main content
MOTHER'S DAY SALE: Books, Bibles, and more at no-nonsense prices through April 20th. >
When A Woman Meets Jesus: Finding the Love Every Woman Longs For
By: Dorothy Valcarcel
Stock No: WW733797 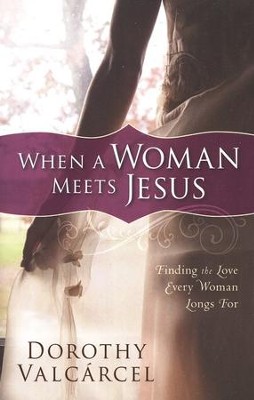 Sample Pages
Buy Item Our Price$14.00
5 out of 5 stars for When A Woman Meets Jesus: Finding the Love Every Woman Longs For (7 Reviews)
In Stock
Quantity:
Stock No: WW733797
Revell / 2009 / Paperback
Quantity:
Add To Cart
of These in Your Cart

When A Woman Meets Jesus: Finding the Love Every Woman Longs For

By: Dorothy Valcarcel
Revell / 2009 / Paperback
5 out of 5 stars for When A Woman Meets Jesus: Finding the Love Every Woman Longs For (7 Reviews) Write a Review
In Stock
Stock No: WW733797

▼▲
In a world of high expectations women's hearts are aching and in need of inner healing. In When a Woman Meets Jesus, debut author Dorothy Valcárcel takes you into the lives of eighteen biblical women from a variety of circumstances who met Jesus and were never the same again. Despite differing centuries and cultures, their stories are as relevant today as they were then. Chapter questions and reflections make this book appropriate for individual and small group study. Paperback.

▼▲
In a world of high expectations, it's easy for women to feel unworthy. But there is someone who loves women just as they are: Jesus.

Through engaging storytelling, Dorothy Valcarcel reveals the lives of eighteen New Testament women who knew Jesus personally. They were broken, needy, lonely, flawed, or empty, but Jesus cared about them and took time to meet their needs. With a narrative that takes readers from biblical times to the modern day, Valcarcel defines the kind of everlasting love for which every woman longs--the kind that lifts her up, holds her tight, and never lets her go.

▼▲
Dorothy Valcarcel has a 25-year career working with charitable organizations worldwide. Her experiences have taken her into ghettos, orphanages, domestic abuse shelters, and food kitchens. The insight she gained, along with her own personal struggle to overcome challenging disabilities sustained in a life-threatening accident, are the catalyst for Transformation Garden--a website designed to encourage women in their walk with Jesus. Valcarcel's daily devotionals are featured on Crosswalk.com. She lives in Sedona, Arizona.

▼▲
Dorothy Valcárcel has a 25-year career working with charitable organizations worldwide. Her experiences have taken her into ghettos, orphanages, domestic abuse shelters, and food kitchens. The insight she gained, along with her own personal struggle to overcome challenging disabilities sustained in a life-threatening accident, are the catalyst for Transformation Garden--a website designed to encourage women in their walk with Jesus. Valcarcel's daily devotionals are featured on Crosswalk.com. She lives in Arizona.

Dorothy Valcárcel's Story: From a tragic accident to a touching book

It was Thursday, August 28, around 6:00 p.m.,: my husband Jim and I were returning home from a business trip in California. We were on the western outskirts of Phoenix, Arizona when the unthinkable happened. A desperate young man, wishing to kill himself, intentionally sat in his car in the middle of the freeway and, without warning, drove his car as fast as it would go into oncoming traffic - into the car we were driving.

The police and investigators told us later the force of the impact was over 145 miles per hour. We were struck head-on. The initial impact killed the young man instantly and left me and my husband fighting for our lives in a wreckage of such twisted metal that at first the police couldn't even tell what kind of car we were in. As one policeman said to a local newspaper reporter, "It was the most violent wreck Id ever seen."

Both Jim and I sustained over 35 broken bones, and many of our bones were shattered and crushed in bits and pieces. For days our lives hung in the balance. However, day by day, with too many surgeries and treatments to mention, the excellent medical care and the powerful prayers of people around the world, put us in a position where our family and friends could breathe easier, finally believing we had a chance to survive.

The day after I was moved out of Intensive Care and taken off the ventilator, Sister Laurana, a tall elderly woman who worked at the hospital, walked into my room and told me, "I was in the emergency room the night they brought you in. We never thought you would live. You lost so much blood and had so many broken bones." Then a huge smile came over her face and she took my broken, crushed and casted left hand in hers. "But you did live. You know Dorothy, someday you will be doing something and it will hit you, 'My life was spared for this.'"

We spent 4 months in the hospital and another 2 years learning to move and walk again. Despite that, I faced night after night not being able to sleep. I'd wake up for hours each and every night - for years. One night, in utter desperation and misery, I screamed out to God, "Isn't the pain in all these fractured bones enough for one girl? Now, I can't sleep." I wasn't just miserable, I was angry.

In the midst of my sleepless pain and agony that night, I decided to make use of my time and read the gospel of John. As I read, something special grabbed my attention: the way Jesus interacted with women. I was intrigued and began to search the Scriptures and found more instances of the ways Jesus touched women's lives. Before long, the rough draft for the book began, and six years later, When A Woman Meets Jesus is now being published.

From this experience, I can say that God is the One I trust, for He knows what is best for each one of us - hanging onto God's hand is the only way to walk, especially when you can't see what's ahead! And from the wreckage of unanticipated and capricious events in our lives, a garden will grow and bloom from the seeds of love He has planted.

I thank you, Lord God, for all my pains; if it please you, Lord, increase them a hundredfold and I shall thankfully accept whatever You give, not sparing me; for in the fulfillment of Your will I find my greatest solace.
St. Francis of Assisi (1182 - 1226)

▼▲
Meet the man who can fulfill your deepest needs.

Though they seem worlds apart from us, the women of New Testament times had similar heartaches and desires. They too were ambitious, worried, broken, lonely, insecure, and unfulfilled. They may have wondered how some unusual man from Galilee could possibly understand their needs. And then they met him.

When a Woman Meets Jesus recounts eighteen powerful stories of women who were transformed by the perfect, unconditional love of the Savior. Rather than trivializing their problems or ignoring women, Jesus responded to their deepest needs. He reminded them of their value and transformed their past, present, and future.

Jesus brought new life to the women he encountered face-to-face, and he will do the same for you. Let this engaging book introduce you to the man who loves you like no other.

Tell us a little about yourself.  I call myself a regular girl who has experienced some of those tough times that life throws at all of us. And in the midst of these stormy times, I have found that having a daily walk with Jesus in the only thing that helps me keep my balance.

What was your motivation behind this project?  My motivation to write When A Woman Meets Jesus came after the trauma of having my husband and myself hit head-on my a young man who was drunk and trying to kill himself and had been dared to "take somebody" else out with you. After being in the hospital for 4 months and sustaining over 35 broken bones each in addition to multiple internal injuries, my husband Jim and I were sent home to a life which had been turned upside down. During the dark nights when sleep evaded me, I would read the Psalms and the book of John. As I read about how Jesus treated people, I began to ask myself the question, "How would Jesus respond to a woman like me? A broken woman whose life would never be the same again?" My search for the answer to these questions led me to the lives of 18 women in the New Testament who encountered Jesus.

What do you hope folks will gain from this project?  From the first chapter of this book, entitled, The Broken Women to the last chapter of this book entitled, the Transformed Women, it is my prayer that women, especially, will find that there is a love that lasts. A love that empowers. A love that holds you tight and never lets you go. It is the healing love of Jesus that makes all the difference in the world. In When A Woman Meets Jesus, that love is found in the way Jesus filled the Empty Woman, Chapter 3. It is present in the way He accepted the Rejected Woman, Chapter 4. It is shown by the way He put hope back into the heart of the Hopeless Woman and the way He comforted the Lonely Woman and the way He listened to the Ignored Woman. All these stories lift your heart and fill it with heaven's everylasting love.

How were you personally impacted by working on this project?  I began to understand more clearly that Jesus' love wasn't just something that affected the people He walked with years ago when He was on earth, it is a love that is just as relevant and current today. That Jesus does understand the challenges I face right now in the 21st century and He longs to help me just as much as He helped the women in the New Testament.

Who are your influences, sources of inspiration or favorite authors / artists?  A great deal of inspiration in my personal life has been provided by my parents who encouraged me and always told me I could be and do anything that God empowered me to do in my life. I also find inspiration in the lives of individuals like C.S. Lewis and Dietrich Bonhoeffer and Corrie ten Boom and Helen Keller who struggled to not only answer some of life's toughest questions, but lived their lives facing some of lifes toughest times. And when it comes to music, there is nothing that lifts my heart like the voices of the fabulous Brooklyn Tabernacle Choir who I refer to in one of the chapters in my book.

Anything else you'd like readers / listeners to know:  Readers are welcome to come to my daily devotional website, Transformation Garden where we are currently studying the lives of all the women in the Bible from Genesis to Revelation. God bless you.