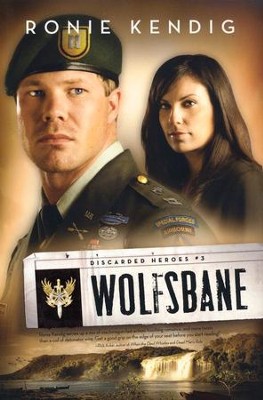 ▼▲
Embark upon a danger-laden mission within the pages of Ronie Kendig's riveting Wolfsbane. Demolitions expert Danielle Roark thought escaping from a brutal Venezuelan general was a challenge. Now she's charged with espionage and returned to the jungle where a new nightmare begins. Will Dani survive or become just another political pawn destined to be lost forever? Former Green Beret Canyon Metcalfe is disgusted with the suits on Capitol Hill. Still wrestling with the memories of a mission gone bad, he and Nightshade launch a mission to find Dani. Can Canyon rescue Dani, armed with nothing but raw courage?

A 2012 Christy Award Winner.  Embark upon a danger-laden mission within the pages of Ronie Kendig’s riveting Wolfsbane. Demolitions expert Danielle Roark thought escaping from a brutal Venezuelan general was a challenge. Now she’s charged with espionage and returned to the jungle where a new nightmare begins. Will Dani survive or become just another political pawn destined to be lost forever? Former Green Beret Canyon Metcalfe is disgusted with the suits on Capitol Hill. Still wrestling with the memories of a mission gone bad, he and Nightshade launch a mission to find Dani. Can Canyon rescue Dani, armed with nothing but raw courage?

Ronie Kendig is an award-winning, bestselling author who grew up an Army brat. After twenty-plus years of marriage, she and her hunky hero husband have a full life with their four children, a Maltese Menace, and a retired military working dog in Northern Virginia. Author and speaker, Ronie loves engaging readers through her Rapid-Fire Fiction. Ronie can be found at www.roniekendig.com, on Facebook (www.facebook.com/rapidfirefiction), Twitter (@roniekendig), and Goodreads (www.goodreads.com/RonieK).

If I could describe Ronie Kendig’s Nightshade series in one word: Explosive.

I can’t get enough of the Nightshade team and each novel proves more exciting than the last! Ronnie is fast becoming a master at delivering heart pounding fiction.

Wolfsbane caused another late night for me, but it was worth it.

This is the most amazing book I have read in a long time.  It has a high intensity, quick moving plot that doesn’t sacrifice depth of character.  Descriptive settings cause the reader to feel like they are living the adventure alongside the characters.  The characters, though unique, feel true to life and experience struggles and sins that aren’t solved in the blink of an eye.

Just when you think she’s packed everything into the plot, Ronie Kendig adds another layer.  This book is worthy of 5+ stars.  It has just the right balance of adventure, suspense, and romance.

If you only read one book this year, this is the one I recommend.

Every second of this book took me on a journey. From the rain-soaked jungles to the courtroom to crazy dangerous secret missions to almost as dangerous family get togethers, each step of Dani and Canyon's is a challenge that you get to experience with them. The best thing about Wolfsbane are these "real" characters who make real-life mistakes. Sure, most of us aren't a part of a covert ops team but we are exposed to some of the same difficult choices and crossroads on our faith walks that Dani and Canyon faced.

Wolfsbane is by far my favorite of the series. I stand in awe of these incredible books and the uber-talented Ronie Kendig. If there are only a few books that you add to your "to-read" list this year make sure one of them is Wolfsbane! You won't regret it. Trust me.

In a book loaded with action, great characters, and high emotion, there are some beautiful reminders of God.  From His plans for an individual’s life to His amazing forgiveness, there are several gentle reminders of God’s presence in the midst of the storm.

This series has excelled in reminding the reader of many fundamental spiritual truths while providing hours of fast-paced entertainment.  Most of all it has highlighted the soldiers who have left the battlefield, but are still haunted by the war.  For those that can handle emotion, passion, and raw intensity, this is a fantastic series and one I highly recommend.

There are some books where, when you read the last page, you just have to sit back and take a deep breath to all the awesome stuff that happened in the story sink in…before picking the book back up and rereading the most amazing parts. ;-) That’s how it was with Wolfsbane. Wow! It’s been a few days since I finished this book, but I’m still wrapped up in the story—reliving everything that Canyon and Dani go through...

Two words could sum up what I think of Wolfsbane…totally awesome! As soon as I read the first few pages, I was jerked off on an edge-of-your-seat adventure that didn’t slow until it came to a very sudden—but satisfying—ending. Wow!! And after getting a glimpse at the other characters in the Nightshade group, I want to get the first two books in this series, Nightshade and Digitalis, to catch up on the stories of Canyon’s teammates, Max and Colton. If you haven’t been able to guess yet, Wolfsbane has earned a permanent place on my favorite’s bookshelf. :-)

The author's military background shines through in vivid detail, but the rugged first names (Canyon, Stone, Range) are distracting at first.  Then Kendig pulls out all the stops with page-turning action, adventure and danger.  Book three in the Discarded Heroes series can pretty much stand alone.

Ronie Kendig is brilliant in the third installment of her Discarded Heroes series, Wolfsbane. Heart-pounding suspense and adrenaline-pumping action keeps the reader pinned to the edge of the chair.

The first two books in the Discarded Heroes series, Nightshade and Digitalis, are excellent. Wolfsbane is no different.

This is Ronie Kendig at her best with action, intrigue, romance and excitement on every page. I simply could not put the book down.

▼▲
I'm the author/artist and I want to review Wolfsbane, Discarded Heroes Series #3.
Back
×
Back
×