Skip to main content
CYBER WEEK SALE! Spot great deals up to 88% off. >
Within These Gilded Halls: A Regency Romance - eBook
By: Abigail Wilson
Stock No: WW122488EB 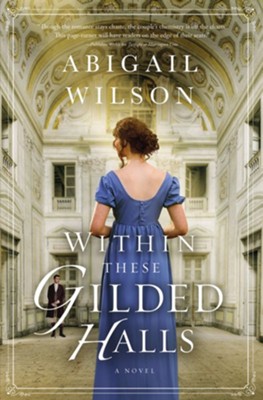 Within These Gilded Halls: A Regency Romance - eBook

After studying art under Miss Drake, a renowned painter, Phoebe Radcliff is certain she can finally move beyond the childish mistake that’s kept her away from home. She is thrilled when Miss Drake employs her to complete a complicated ballroom renovation, believing it will lead to a new, happier future.

Everything changes, however, the moment Miss Drake is murdered. With her last breath she imparts the location of a clue to Phoebe. Can the biggest secret of Avonthorpe Hall be true—the rumored treasure real? Phoebe is tasked to finish her work in the ballroom by Miss Drake’s infuriatingly regimented yet all-too-handsome nephew, Lt. Graham Burke. Determined to fulfill the promise she made to her beloved teacher to find the treasure, Phoebe also works to uncover the truth about Miss Drake’s death—surely the two must be linked. If only she can do so before Lt. Burke leases the house.

But dark shadows line the gilded halls of Avonthorpe and soon enough, Phoebe realizes she’s not the only person who knows about the clues. What’s worse, she’ll need Lt. Burke’s help to stay ahead of whoever is hard on her heels. If only she weren’t so attracted to him. And why is she? She’s always had far greater plans for her life than settling into marital bliss.

Caught up in a deadly race for answers, Phoebe must find a way to breach the shroud of lies that surrounds every last resident in the house and, more importantly, face a past she’s been running away from for far too long.

Abigail Wilson combines her passion for Regency England with intrigue and adventure to pen historical mysteries with a heart. A registered nurse, chai tea addict, and mother of two crazy kids, Abigail fills her spare time hiking the national parks, attending her daughter’s diving meets, and curling up with a great book. Abigail was a 2020 HOLT Medallion Merit Finalist, a 2017 Fab Five contest winner, and a Daphne du Maurier Award for Excellence Finalist. She is a cum laude graduate of the University of Texas at Austin and currently lives in Dripping Springs, Texas, with her husband and children. Connect with Abigail at acwilsonbooks.com; Instagram: @acwilsonbooks; Facebook: @ACWilsonbooks; Twitter: @acwilsonbooks.

▼▲
I'm the author/artist and I want to review Within These Gilded Halls: A Regency Romance - eBook.
Back
Back