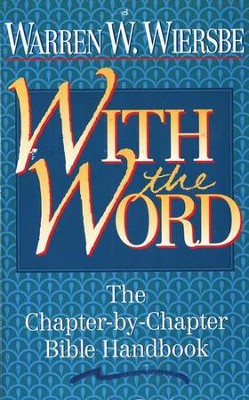 ▼▲
With the Word, a conversational survey of the Bible, guides you through each book, chapter by chapter, and encourages you to: Discover rich, life-changing applications fromthe Scriptures, Develop your own personal Bible reading program, Meditate on the Scriptures - seeking the truths God has for you, and to Apply the spiritual truths you discover. It is a fresh approach to learning and applying the truths God's Word has for your life.

A fresh approach which not only offers trustworthy exposition, but also provides a book-by-book, chapter-by-chapter tour through the glory of the Bible. This highly readable personal "conversation" with Scripture guides you through each book, helping you reap the rich, life-changing applications on every page. You will be encouraged to develop your own personal Bible reading program and learn the power of meditation on its truth.

▼▲
I'm the author/artist and I want to review With the Word.
Back
Back