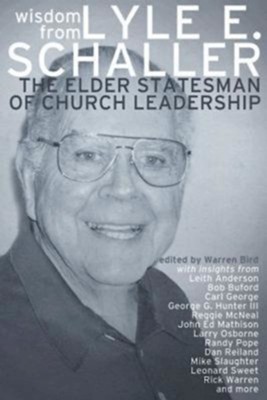 One poll declared him the most influential American church leader of the last 100 years. Lyle E. Schaller has written literally millions of words of insight and advice for church leaders. His books alone number nearly 60 titles and span 40 years of publication, beginning in 1964.

Now, this single volume makes available his best insights, organized by topic and framed with fascinating background perspective of Schaller himself. This volume both introduces Schaller to a new generation of church leaders and is a handy resource for those who grew up on Schaller's writing and count him as a major ministry influence.

Warren Bird, Ph.D., is Vice President of Research for the Evangelical Council for Financial Accountability (ECFA). He was previously the Director of Research and Intellectual Capital Support for Leadership Network for 12 years. He has collaboratively authored or co-authored more than 30 books for ministry leaders, including Next: Pastoral Succession that Works, Hero Maker, How to Break Church Growth Barriers, and Better Together: Making Church Mergers Work. Warren is an ordained minister through the Christian and Missionary Alliance, having served as a church planter, associate pastor, or lead pastor as well as long-time adjunct seminary professor. Warren and his wife, Michelle, live just outside New York City and have two grown children. He’s on Twitter @warrenbird and regularly blogs at: https://largechurchtrends.blogspot.com/

Lyle E. Schaller was the country's leading interpreter of congregational systems and their vitality. He was the author of dozens of books, including From Geography to Affinity, also published by Abingdon Press. He lived in Naperville, Illinois.

▼▲
I'm the author/artist and I want to review Wisdom from Lyle E. Schaller: The Elder Statesman of Church Leadership - eBook.
Back
Back