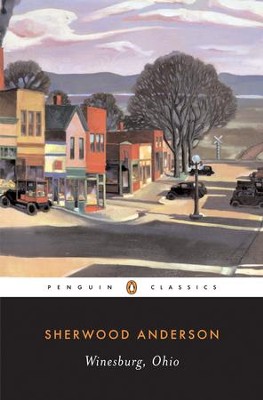 ▼▲
Published in 1919, Winesburg, Ohio is Sherwood Anderson’s masterpiece, a work in which he achieved the goal to which he believed all true writers should aspire: to see and feel “all of life within.” In a perfectly imagined world, an archetypal small American town, he reveals the hidden passions that turn ordinary lives into unforgettable ones. Unified by the recurring presence of young George Willard, and played out against the backdrop of Winesburg, Anderson’s loosely connected chapters, or stories, coalesce into a powerful novel.

In such tales as “Hands,” the portrayal of a rural berry picker still haunted by the accusations of homosexuality that ended his teaching career, Anderson’s vision is as acute today as it was over eighty-five years ago. His intuitive ability to home in on examples of timeless, human conflicts—a workingman deciding if he should marry the woman who is to bear his child, an unhappy housewife who seeks love from the town’s doctor, an unmarried high school teacher sexually attracted to a pupil—makes this book not only immensely readable but also deeply meaningful. An important influence on Faulkner, Hemingway, and others who were drawn to Anderson’s innovative format and psychological insights, Winesburg, Ohio deserves a place among the front ranks of our nation’s finest literary achievements.

▼▲
The Modern Library has played a significant role in American cultural life for the better part of a century. The series was founded in 1917 by the publishers Boni and Liveright and eight years later acquired by Bennett Cerf and Donald Klopfer. It provided the foundation for their next publishing venture, Random House. The Modern Library has been a staple of the American book trade, providing readers with affordable hardbound editions of important works of literature and thought. For the Modern Library's seventy-fifth anniversary, Random House redesigned the series, restoring as its emblem the running torch-bearer created by Lucian Bernhard in 1925 and refurbishing jackets, bindings, and type, as well as inaugurating a new program of selecting titles. The Modern Library continues to provide the world's best books, at the best prices.

▼▲
"When he calls himself a 'poor scribbler' don't believe him. He is not a poor scribbler . . . he is a very great writer."--Ernest Hemingway

"Winesburg, Ohio, when it first appeared, kept me up a whole night in a steady crescendo of emotion."--Hart Crane

"As a rule, first books show more bravado than anything else, unless it be tediousness. But there is neither of these qualities in Winesburg, Ohio. . . . These people live and breathe: they are beautiful."--E. M. Forster

"Winesburg, Ohio is an extraordinarily good book. But it is not fiction. It is poetry."--Rebecca West

▼▲
I'm the author/artist and I want to review Winesburg, Ohio - eBook.
Back
×
Back
×