Skip to main content
SPRING CYBER EVENT STARTS NOW: And it's a really BIG deal! Up to 88% off through 5/24>
Wiersbe Bible Commentary OT
By: Warren W. Wiersbe
Stock No: WW45406 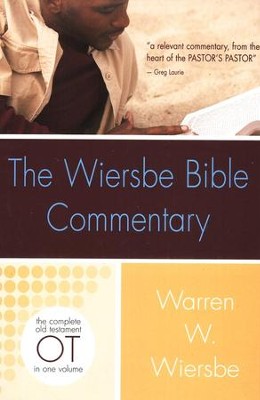 ▼▲
Whether you are a pastor, teacher, or layperson, now you can study the Bible in easy-to-read sections that emphasize personal application as well as biblical meaning. Developed and abridged from Dr. Wiersbe's popular "Be" series of Bible study books, this commentary carefully unpacks all of the Old Testament. The Wiersbe Bible Commentary Old Testament offers you insights on the entire Old Testament, with introductions and outlines for each book, and clear, readable text that's free of lofty jargon. Non-technical.

Dr. Warren W. Wiersbe is an internationally known Bible teacher and the former pastor of three churches, including the Moody Church in Chicago. For ten years he served as general director and Bible teacher for the Back to the Bible radio broadcast. Dr. Wiersbe has written more than 150 books, including the popular "Be" series of expositional Bible studies, which has sold more than four million copies. In 2002, he was awarded the Jordon Lifetime Achievement Award by the Evangelical Christian Publishers Association. He and his wife, Betty, live in Lincoln, Nebraska.

Whether you are a pastor, teacher, or layperson, now you can study the Bible in easy-to-read sections that emphasize personal application as well as biblical meaning. Developed from Dr. Wiersbe’s popular "Be" series of Bible study books, this commentary carefully unpacks all of God’s Word.

Let one of the most beloved and respected Bible teachers of our time guide you verse-by-verse through the Scriptures. It’s the trusted reference you’ll love to read.

▼▲
Dr. Warren W. Wiersbe (1929–2019) was an internationally known Bible teacher, author, and conference speaker. He served as the pastor of Moody Church in Chicago from 1971 to 1978. In his lifetime, Dr. Wiersbe wrote over 170 books—including the popular BE series, which has sold over four million copies. Dr. Wiersbe was awarded the Gold Medallion Lifetime Achievement by the Evangelical Christian Publishers Association (ECPA). His writing will impact generations to come.

Q: Is the Wiersbe OT hardcover commentary abridged from the Be serie ss?

Yes, this commentary is abridged from Warren Wiersbe's "BE" series.

▼▲
I'm the author/artist and I want to review Wiersbe Bible Commentary OT.
Back
Back