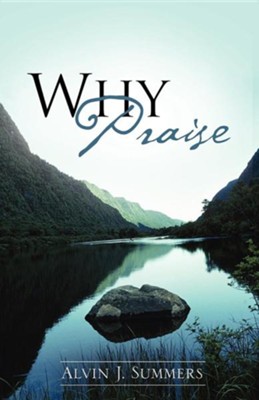 ▼▲
Are you tired of living a defeated Christian life? So many believers live beneath their privileges simply because they have not come into the full knowledge of what Christ did at Calvary. We are told to live holy.but how? Why Praise is an attempt to answer that question.

▼▲
Are you tired of living a defeated Christian life? Are you sick of trying to overcome the same things as if they are stronger than your God? Well, I have good news. You don't have to be what you are, Christ died to make us free from the law of sin and death. So many believers live beneath their privilege simply because they have not come into the full knowledge of what Christ did at Calvary. They go to church week in and week out hoping for some hocus pocus action from the pulpit or during the praise service that will catapult them from one dimension to another. More often times than not they leave inspired, but not motivated to attack their lives with Godly fervor. We are told to live holy but how. "Why Praise" is an attempt at that process. We are free Alvin J. Summers is the proud Pastor of Oak Grove Missionary Baptist Church in Martin, TN where he has served for eleven years. A man after God's own heart, he encourages all to "love God in honesty and integrity." Alvin has a B.M.E. from Henderson State University and a M.Div. from Memphis Theological Seminary. Alvin's quiet humility gives way when he is given the opportunity to share the Gospel. "I am unashamedly Christian," he declares. "Gods been good to me and I am not ashamed to tell the story" is his personal testimony. He and his wife Colleen have been married for 18 years and have two children. But most of all, he has taken upon himself the responsibility of studying to show himself approved unto God a workman that needs not to be ashamed, but one that tries to rightly divide the word of truth. (2 Timothy 2: 15)

▼▲
I'm the author/artist and I want to review Why Praise.
Back
×