Skip to main content
Why I Am Not an Arminian
By: Robert A. Peterson, Michael D. Williams
Stock No: WW832483 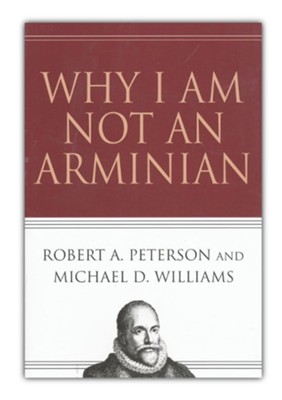 Why I Am Not an Arminian

▼▲
What's wrong with Arminianism? Arminian theology is sweeping through the evangelical churches of North America. While most Arminians are good, sincere, orthodox Christians, authors Roberts A. Peterson and Michael D. Williams contend that aspects of Arminian thought are troubling both biblically and theologically. In particular, they argue, Arminians have too lofty a view of human nature and an inadequate understanding of God's sovereign love in Christ. This book explores the biblical, theological and historical background to the Calvinist-Arminian debate. The irenic nature and keen insight of this book will be appreciated by laypeople, pastors and scholars alike.

What's wrong with Arminianism? Arminian theology is sweeping through the evangelical churches of North America. While most Arminians are good, sincere, orthodox Christians, authors Robert A. Peterson and Michael D. Williams contend that aspects of Arminian thought are troubling both biblically and theologically. In particular, they argue, Arminians have too lofty a view of human nature and an inadequate understanding of God's sovereign love in Christ. Why I Am Not an Arminian explores the biblical, theological and historical background to the Calvinist-Arminian debate. The irenic nature and keen insight of this book will be appreciated by laypeople, pastors and scholars alike.

Robert A. Peterson (Ph.D., Drew University) is professor of systematic theology at Covenant Theological Seminary in St. Louis, Missouri. He was formerly professor of New Testament and theology at Biblical Theological Seminary in Hatfield, Pennsylvania. His books include Getting to Know John's Gospel: A Fresh Look at Its Main Ideas, Hell on Trial: The Case for Eternal Punishment, Calvin's Doctrine of the Atonement, Adopted by God: From Wayward Sinners to Cherished Children (all Presbyterian Reformed) and Hell Under Fire (coedited with Chris Morgan, Zondervan). He has written numerous articles, was a contributor to the second edition of the Evangelical Dictionary of Theology (Baker) and edits Covenant Seminary's journal, Presbyterion.

"A highly nuanced, theologically erudite work which presents Arminianism in the best possible light and then shifts the focus onto a positive construction of Calvinism to counter Arminian claims."

"Very beneficial to those learning about Calvinism or Calvinists who are looking to reinforce their particular perspective. . .Very useful as a supplemental text for one studying theology. Pastors who have an interest in theology will appreciate the brevity of the book."

▼▲
I'm the author/artist and I want to review Why I Am Not an Arminian.
Back
Back