Skip to main content
The Man Who Would Be King and Other Stories
By: Rudyard Kipling
Stock No: WW80519 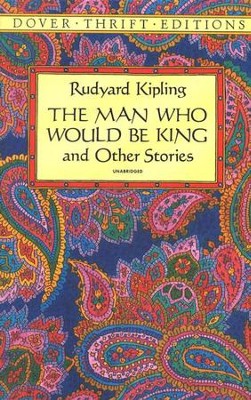 The Man Who Would Be King and Other Stories

▼▲
The Man who would be King, the tale of two vagabonds who attempt to establish a kingdom among primitive tribesmen, is both a classic of high adventure and a searching parable of Empire. This collection brings together seventeen of Kipling's early stories, written between 1885 and 1888, when Kipling was working as a journalist in India. Wry comedies of British officialdom alternate with glimpses into the harsh lives of the common soldiers and the Indian poor, revealing Kipling's legendary powers of observation and, in Baa Baa, Black Sheep his own miserable childhood. From Mrs Hauksbee's Simla drawing-room to Mulvaney's cot in barracks, to the wild hills of Kafiristan, Kipling re-creates the India he knew in stories by turns ironic and sentimental, compassionate and bitter, displaying the brilliance that has captivated readers for over a century. Recommended for ages 11 and up.

Winner of the Nobel Prize for literature in 1907, Rudyard Kipling (1865–1936) drew upon his experiences in Anglo-Indian Society for much of his writing. This volume presents five of Kipling's best early stories, including "The Phantom Rickshaw," a psychological thriller; "Wee Willie Winkie," a delightful display of love for children; "Without Benefit of Clergy," the poignant story of an Englishmen's affair with an Islamic woman; "The Strange Ride of Morrowbie Jukes"; and the celebrated title story.

Nobel Laureate Rudyard Kipling (1865–1936) is best remembered for children's tales such as The Jungle Book as well as his poetry and stories about British soldiers in India, which include "Gunga Din" and The Man Who Would Be King. Kipling was enormously popular at the turn of the 20th century but his reputation declined with the change in attitude toward British imperialism. In recent years Kipling's works have found new acclaim as a vibrant source of literary and cultural history.

▼▲
I'm the author/artist and I want to review The Man Who Would Be King and Other Stories.
Back
Back