Skip to main content
OUR BIGGEST BARGAIN SALE EVER: Over 6,000 deals at never-seen-before prices ~ through 8/23. Shop now >
Who Was Frank Lloyd Wright?
By: Ellen Labrecque, Gregory Copeland, Nancy Harrison
Stock No: WW483139 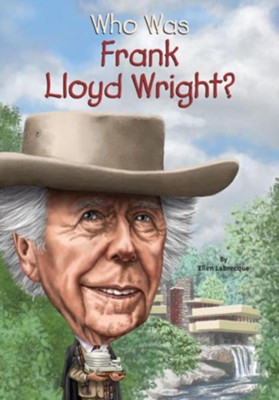 Who Was Frank Lloyd Wright?

Who Was Frank Lloyd Wright?

Full of adventure that will keep young children reading, Who Was Frank Lloyd Wright Perfect for middle-grade readers, this engaging book with help kids learn about the father of organic architecture, and the greatest architect of all time.

Part of the Who is..."series of biographies for middle-grade readers. 104 pages, softcover. Grades 1-7.

▼▲
Born in Wisconsin in 1867, Frank Lloyd Wright became obsessed with a set of building blocks his mother had given to him on his ninth birthday. He grew up to become the father of organic architecture and the greatest American architect of all time, having designed more than 1,100 buildings during his lifetime. These included  private homes – such as the stunning Fallingwater, churches, temples, a hotel, and the world-famous Guggenheim Museum in New York City.  When asked how he could create so many designs, he answered, "I can’t get them out fast enough." Frank Lloyd Wright was a man ahead of his time who could barely keep up with his own ideas!

▼▲
Ellen Labrecque is a former Senior Editor for Sports Illustrated for Kids and the author of over twenty nonfiction books for young readers, including biographies of Jim Thorpe and Magic Johnson.

▼▲
I'm the author/artist and I want to review Who Was Frank Lloyd Wright?.
Back
Back