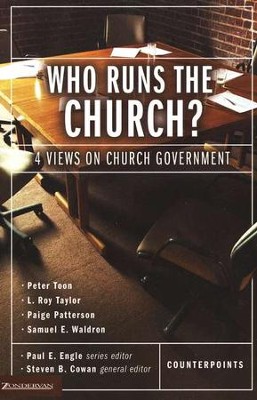 ▼▲
Churches have split and denominations have formed over the issue of church government. Yet while many Christians can explain their particular church’s form of rule and may staunchly uphold it, few have a truly biblical understanding of it. What model for governing the church does the Bible provide? Is there room for different methods? Or is just one way the right way?In Who Runs the Church? Four predominant approaches to church government are presented by respected proponents: • Episcopalianism (Peter Toon)• Presbyterianism (L. Roy Taylor)• Single-Elder Congregationalism (Paige Patterson)• Plural-Elder Congregationalism (Samuel E. Waldron). As in other Counterpoints books, each view is followed by critiques from the other contributors, and its advocate then responds. The interactive and fair-minded nature of the Counterpoints format allows the reader to consider the strengths and weaknesses of each view and draw informed, personal conclusions.

▼▲
I'm the author/artist and I want to review Who Runs the Church? 4 Views on Church Government.
Back
×
Back
×