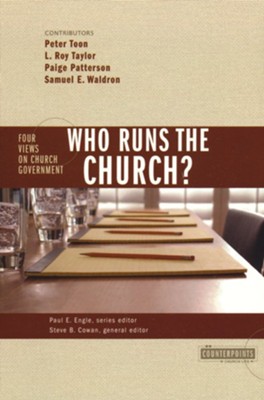 Churches have split and denominations have formed over the issue of church government. While many Christians can explain their church's form of rule or defend it because of its "tried and true" traditions, few people understand their church's administrative customs from a biblical perspective.

Who Runs the Church? explores questions such as: What model for governing the church does the Bible provide, and is such a model given for practical or spiritual reasons? Is there room for different methods within Christianity? Or is there a right way of "doing church"? And, finally, how (and by whom) should the church be governed?

As in other Counterpoints books, each view is followed by critiques from the other contributors, and its advocate then responds.

▼▲
I'm the author/artist and I want to review Who Runs the Church? 4 Views on Church Government.
Back
Back