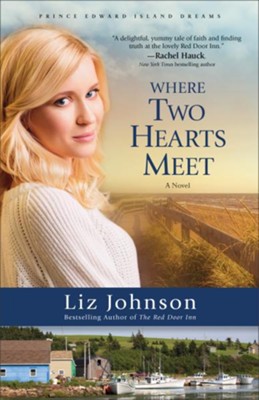 Caden Holt is the chef at the Red Door Inn bed-and-breakfast.  He is hoping to persuade Adam Jacobs to write a great review.  Is he who he claims to be?

In her kitchen at the Red Door Inn, executive chef Caden Holt is calm, collected, and competent. But when her boss asks her to show off their beautiful island to impress a visiting travel writer and save the inn, Caden is forced to face a world much bigger than her kitchen--and a man who makes her wish she was beautiful.

Journalist Adam Jacobs is on a forced sabbatical on Prince Edward Island. He's also on assignment to uncover a story. Instead he's falling in love with the island's red shores and Caden's sweets.

When Caden discovers Adam isn't who she thought he was, she realizes that the article he's writing could do more than ruin the inn's chances for survival--it might also break her heart.

Readers will discover hope for the hurting, joy for the broken, and romance for the lonely at the enchanting Red Door Inn.

▼▲
Liz Johnson is the author of more than a dozen novels, including A Sparkle of Silver, A Glitter of Gold, The Red Door Inn, Where Two Hearts Meet, and On Love's Gentle Shore, as well as a New York Times bestselling novella and a handful of short stories. She makes her home in Phoenix, Arizona.

▼▲
I'm the author/artist and I want to review Where Two Hearts Meet #2.
Back
Back