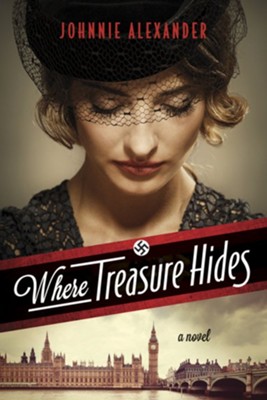 What was your motivation behind this project?  While researching different aspects of World War II for another project, I became fascinated by the overwhelming amount of art looted by the Nazis and heartbroken over the horrendous plight of so many of the children. Readers experience both these issues through this story.

What do you hope folks will gain from this project?  The protagonist, Alison Schuyler, descends from a long line of artistic Van Schuylers. Protecting her family's art gallery from the Nazis means more to her than anything. But as the war drags on, she has to make choices about what, and who, to protect. Despite everything that the war takes away from her, Alison learns to trust God with her future (Proverbs 31:25).

How were you personally impacted by working on this project?  Horrible things happen during war, especially to children. It wasn't easy reading accounts of parents having to make agonizing decisions for the sake of safety. Certain scenes in the novel were very difficult to write, but they needed to be included because they show how horrid it was to live under Nazi occupation.

Who are your influences, sources of inspiration or favorite authors / artists?  My writing is deeply influenced by Christian themes such as forgiveness and grace. I love epic movies and books such as Les Miserables, The Lord of the Ring Trilogy, and The Secret Garden. Cary Grant, Deborah Kerr, Ingrid Bergman, and Audry Hepburn are a few of my favorite actors. Favorite authors include Daniel Silva, Kate Morton, Anne Perry, Jane Kirkpatrick, and Davis Bunn.

Anything else you'd like readers / listeners to know:  Before it was published, Where Treasure Hides won the 2011 American Christian Fiction Writers Genesis Contest in Historical Fiction.