Skip to main content
When Daddy Prays
By: Nikki Grimes
Stock No: WW52666 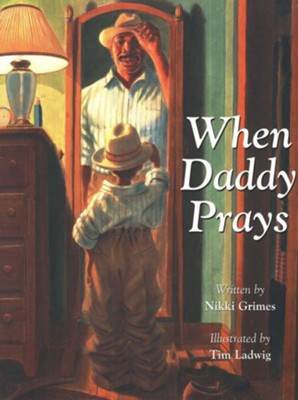 ▼▲
In this collection of new poems by Nikki Grimes, a child learns about prayer from his father, whose prayers carry the family through each day - no matter what the circumstances. Nikki Grimes believes that spirituality and prayer are signs of true strength and power. When Daddy Prays celebrates fathers who help their children see this.

▼▲
When Daddy prays
my fear of darkness disappears
and angels tiptoe down the hall.
I hear them through the door and wall . . .when Daddy prays.


In this collection of new poems by Nikki Grimes, a child learns about prayer from his father, whose prayers carry the family through each day -- no matter what the circumstances.

Nikki Grimes believes that spirituality and prayer are signs of true strength and power. When Daddy Prays celebrates fathers who help their children see this. Nikki writes, "In my view there is no more powerful image than that of a strong man bowing before God."

And illustrator Tim Ladwig has created remarkable images, rich with tenderness and touches of affectionate humor, to enhance and complete this exceptional book.

▼▲
Nikki Grimes is a New York Times bestselling author. Her previous works include At Jerusalem's Gate, When Daddy Prays (both Eerdmans), and Bronx Masquerade (Dial), which won the Coretta Scott King Award. Most recently, she won the 2017 Laura Ingalls Wilder Award for her lasting contributions to children's literature. Nikki lives in California. Visit her website at www.nikkigrimes.com.

Tim Ladwig. When he was eight years old, Tim lost an eye in an accident. During his recovery, his father gave him oil paints, a couple of brushes, and a small canvas. He painted a clown with colors straight from the tube. Tim's first work was promptly framed, and his love of painting was born.

Tim earned a degree in graphic design from Wichita State University and also studied painting and drawing for a semester in Rome. Following school, Tim worked as an associate art director of an advertising design studio in Wichita, Kansas.

Then for seventeen years Tim served as a community minister with an inner-city Christian mission organization in Wichita, Los Angeles, and Newark. To help meet the need for children's books that accurately depict urban culture, he created the picture book Psalm Twenty-Three, in which he applied the psalmist David's pastoral words to a normal day of two city children.

Tim has illustrated a number of children's books, two of which, The Fear Not Angel and Psalm Twenty-Three were Gold-Medallion Award finalists. Psalm Twenty-Three and Silent Night were also honored with ABA "Pick of the Lists" awards. Tim serves as a graphic artist for World Impact Urban Ministry Institute and lives in Wichita, Kansas.

▼▲
Catholic Observer
"With today's seemingly never-ending news coverage of families breaking up and the important role that fathers play in the procedure, this book offers a ray of sunshine for these fathers and their sons."

School Library Journal
"Poignant, beautifully expressed poems . . . brimming with love and faith . . . celebrate a father's devotion as seen through the eyes of his child. Conversational, simple, and deeply moving, they stress the man's reliance on God in all aspects of his life."

Kirkus Reviews
"Fourteen graceful poems portray a small boy's relationship with his prayerful father. . . Bold, strong pictures match the poetry and anchor the writing in an everyday world. . . A unique offering for a family read-aloud."

▼▲
I'm the author/artist and I want to review When Daddy Prays.
Back
Back