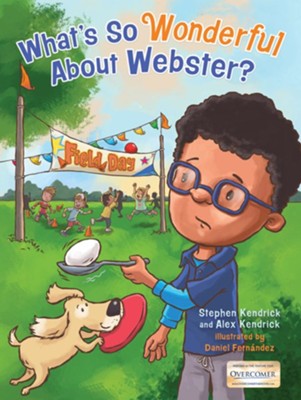 What's So Wonderful About Webster?

▼▲
Field day's approaching, and Webster is worried. He can't run fast, he trips over jump ropes, and his frisbee always lands in a tree! How can he help his class win the medal? If God gave Webster any special gifts, he doesn't know what they are---yet. But the competition's not over! Ages 4 to 8.

▼▲
It’s almost field day, and Webster is worried. He can’t run fast, he trips on the jump rope, and his Frisbee always lands in a tree. How will he help his class get the medal? Webster is sure that God forgot to make anything special about him.
Join Webster and his class as the whistle blows and he discovers a few God-given skills that just might save field day. This whimsical, illustrated picture book reminds young readers that they were each wonderfully made by God!

▼▲
Stephen Kendrick is an ordained minister and New York Times bestselling coauthor of The Love Dare, The Resolution for Men, and The Battle Plan for Prayer. He has spoken in numerous countries to students, families, and men’s groups. He is also an accomplished actor, screenwriter, and film director, whose credits include Facing the Giants, Fireproof, Courageous, and War Room. He and his wife, Christina, have six children.

Alex Kendrick is an ordained minister who has served families for 20 years in student ministry and associate pastor positions. Along with his brother Stephen, he is also a screenwriter (Facing the Giants, Fireproof, Courageous, and War Room), movie producer, and coauthor of three New York Times bestselling books (The Love Dare, The Resolution for Men, and The Battle Plan for Prayer). Alex and his wife, Jill, have six children.

▼▲
I'm the author/artist and I want to review What's So Wonderful About Webster?.
Back
Back