Skip to main content
Get Christmas Ready Sale — Over 1,000 deals thru 9/26!
What's So Great About Christianity [Hardcover]
By: Dinesh D'Souza
Stock No: WW985179 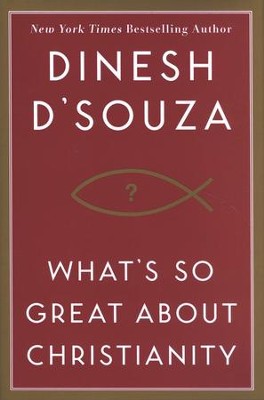 What's So Great About Christianity [Hardcover]

▼▲
What's so great about our faith? Challenging the assumptions of believers and skeptics alike, D'Souza takes on E.O. Wilson, Richard Dawkins, Sam Harris, Christopher Hitchens, and other leading critics of the church to show how Christianity is at home with science and philosophy---and how it can offer lasting happiness in a disillusioned world. 256 pages, hardcover from Regnery.

▼▲
In a world of facts and figures, can an intellectual have faith? Is it possible to believe anything the Bible says? Yes, and one man will show you how.

Amidst scientists’ attempts to debunk Christianity’s truths and atheists’ assuming the Bible is a how-to-be-virtuous self-help book, bestselling author Dinesh D’Souza resolves to both answer the tough questions and challenge believers as well as doubters to search for the ultimate truths about theories of origin. D’Souza tackles subjects and events such as the Crusades and the Spanish Inquisition, the Big Bang theory and Darwinism—everything you always pondered but never scrutinized, now placed under the proverbial microscope and studied thoroughly.

▼▲
DINESH D'SOUZA has had a prominent career as a writer, scholar, public intellectual, and filmmaker. Born in India, D’Souza came to the U.S. as an exchange student at the age of 17 and graduated Phi Beta Kappa from Dartmouth College. The author of many bestselling books including America, The Big Lie, Death of a Nation, and United States of Socialism, he is also the creator of three of the top ten highest-grossing political documentaries ever made.

▼▲
Dinesh DSouza, a former White House domestic policy analyst, is currently the Rishwain Research Scholar at the Hoover Institution at Stanford University. He is the bestselling author of Whats So Great About America, Ronald Reagan: How an Ordinary Man Became an Extraordinary Leader, and many other books.

▼▲
Is Christianity obsolete? Can an intelligent, educated person really believe the Bible?

Or are atheists correct? Does science disprove Christianity, debunk it as a force for good, and discredit it as a guide to morality?

In this groundbreaking book, bestselling author Dinesh DSouza is the first to tackle these questions and challenge atheists on their own secular turf. Approaching atheism with the skeptical eye usually reserved for religion, DSouza uses the latest scientific (among other) evidence to show why Christianity makes sense, why the atheists arguments are wrong, and why there really is something great about Christianity.

Whats So Great About Christianity explains:

By revealing the superiority of Christianity, DSouza raises the culture war debate to a whole new level. This book seeks to prove that Christianity and science are not at odds with each other; that atheism is philosophically, factually, and demographically bankrupt; and that a resurgent Christianity is the real wave of the future, and atheism a trend of the past.

▼▲
I'm the author/artist and I want to review What's So Great About Christianity [Hardcover].
Back