Skip to main content
OUR BIGGEST BARGAIN SALE EVER: Over 6,000 deals at never-seen-before prices ~ through 8/23. Shop now >
What's In the Bible: An All-in-One Guide to God's Word
By: R.C. Sproul, Robert Wolgemuth
Stock No: WW545987 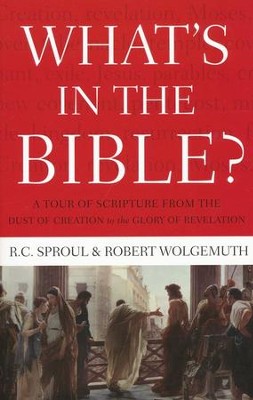 What's In the Bible: An All-in-One Guide to God's Word

▼▲
What happens when two best-selling authors---a theologian and a layperson---team up to create an overview of the entire Bible? A contemporary, readable guide that highlights God's voice, activity, and purpose. Written in clear, straightforward language, this updated edition includes revised content and a new topical index. 464 pages, softcover from Nelson.

A road map that will help you better comprehend the Bible as a whole. Sharpen your understanding and admiration for the most important book ever written--the most monumental story ever recorded.

Esteemed theologian R.C. Sproul and best-selling author Robert Wolgemuth collaborated to highlight the essence of God's voice, activity, and purpose throughout the Old and New Testaments in this understandable and readable introduction to the Bible.

Written from the perspective of a theologian and a layman, What's In the Bible is designed to welcome both newcomers and seasoned believers to the Bible by:

This revised and updated edition also includes a new topical index for ease of reference.

Dr. R.C. Sproul is the founder and chairman of Ligonier Ministries, an international Christian education ministry located near Orlando, Florida. His teaching can be heard on the program Renewing Your Mind, which is broadcast on hundreds of radio outlets in the United States and in 40 countries worldwide. He is the executive editor of Tabletalk magazine, general editor of The Reformation Study Bible, and the author of more than seventy books and scores of articles for national evangelical publications. Dr. Sproul also serves as president of Ligonier Academy of Biblical and Theological Studies, and Reformation Bible College in Sanford, Florida. He currently serves as senior minister of preaching and teaching at Saint Andrew's in Sanford, FL.

Robert Wolgemuth has been in the book publishing business for over forty years. A former president of Thomas Nelson Publishers, he is the founder of Wolgemuth & Associates, a literary agency representing the work of more than two hundred authors.

The author of over twenty books, Robert is known as a relentless champion for the family, relationship building, and biblical truth. His favorite "audience" is one friend, a corner table in a small caf&eacute;, and a steaming cup of coffee (extra cream but no sugar) between them.

A graduate of Taylor University, from which he received an honorary doctorate in May 2005, Robert has two grown daughters, two sons-in-law, five grandchildren, one grandson-in-law, and a great-grandson named Ezra. He and his wife, Nancy DeMoss Wolgemuth, live in Southwest Michigan.

▼▲
I'm the author/artist and I want to review What's In the Bible: An All-in-One Guide to God's Word.
Back
Back