Skip to main content
SPRING CYBER EVENT STARTS NOW: And it's a really BIG deal! Up to 88% off through 5/24>
Whatever the Cost: Facing Your Fears, Dying to Your Dreams, and Living Powerfully
By: David Benham, Jason Benham
Stock No: WW032999 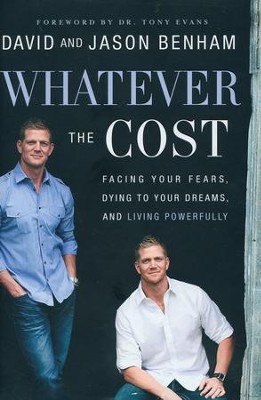 Whatever the Cost: Facing Your Fears, Dying to Your Dreams, and Living Powerfully

▼▲
After retiring from professional baseball, the Benham twins built a multi-million dollar real-estate business and secured a TV reality series---until the network fired them for speaking about their faith. Read their inspiring story and discover how biblical principles can help you die to your dreams, face your fears, and stand up for what's right! 240 pages, hardcover from Nelson.

▼▲
“Two nationally-acclaimed real estate entrepreneurs share biblical principles to revolutionize your work and family life, and give you the courage to stand up for what is right.”

This book follows the story of highly motivated and entrepreneurial twin brothers, David and Jason Benham, from their formative years and ventures into professional baseball to their rise as owners of a multi-million dollar business empire and securing an HGTV reality series. It’s a journey where the brothers learned how they must die to their dreams not just once, but twice as they walked away from baseball before being called up to the Big Show and later as their TV series was stripped away from them just before airing when the network succumbed to media pressures surrounding their faith. These experiences only helped them realize that the key to powerful living is found when you die to your dreams and face your fears, and choose to live powerfully through it all. The biblical principles they implemented to guide their work and families are revealed in practical terms to apply to our daily lives and give us courage to stand for what is right. The book will expand on principles such as:

After retiring from professional baseball in 2002, David and Jason Benham, twin brothers and acclaimed entrepreneurs, began building their business empire, growing it to more than 10 companies spanning 35 states and around the globe. Their first venture, the Benham Real Estate Group, exploded to 100 locations and was named by Inc. as one of the fastest growing private companies in America. The brothers are happily married to Lori and Tori, with a combined 9 children, and live on the same street in Charlotte.

Scott Lamb serves as the President of Reformation Press and the Executive Director of the Presbyterian Lay Committee in Nashville, Tennessee. He is a Baptist pastor who has shepherded churches in Alabama, Missouri, and Kentucky. He and his wife, Pearl, have six children. He is the author of Pujols: More than the Game (Thomas Nelson, 2011).

▼▲
I'm the author/artist and I want to review Whatever the Cost: Facing Your Fears, Dying to Your Dreams, and Living Powerfully.
Back
Back