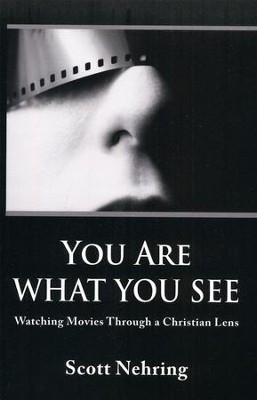 You Are What You See: Watching Movies Through a Christian Lens

▼▲
As Christian movie-goers, we complain about the morally questionable choices at our local cineplex---but film critic Nehring says we have only ourselves to blame! Learn why he believes movies matter and how we can engage our culture, "take the blinders off," and discern each film's value---including its potential for opening dialogue with non-Christians. 285 pages, softcover from Right Line.

▼▲
Are movies just sex and violence or is there more to a good story--something that speaks to your soul? Movies are more than flickering lights on a wall. Movies matter. Movies impact your life every day, even if you never watch one. In You Are What You See, www.GoodNewsFilmReviews.com film critic Scott Nehring reveals the truth behind what you see on screen: Why movies affect us so deeply, and how one producer, actor, director, or writer can change the way you think.

▼▲
Scott Nehring, author of You Are What You See, is genuinely saddened by the way Christians and the film industry interact. As a self-confessed movie junkie and a film reviewer by trade, Nehring loves cinema, from Schindlers List to Pulp Fiction to War of the Worlds. The problem is that hes also a Christian. Few secular movies are edifying, or even appropriate; at the same time, many Christian films are trite and, in Nehrings opinion, hardly deserve to be called film.

So, where are the options?

You Are What You See centers on how Christians interact with movie cultureor, rather, how Christians fail to interact with movie culture. Nehring rightfully critiques us, his fellow Christians, for failing to engage culture in a way that honors God: either we ingest secular movies without thinking about the ideas behind them, or we refuse wholesale to watch anything that doesnt have the Christian label on it. Neither approach works, Nehring argues. We are not saved so that we can live behind a fence. Nor are we meant to act like non-Christians in everything but what we do on Sunday. We are called to be in the worldrather than watch it from the security of our Christianized bubblebut not of it (John 17:13-16). The cure, he proposes, is to know the two basic truths about film: that there can be God-honoring beauty in film, and that it is possible to watch a movie and learn something.

Despite the fact that his premise has huge potential to lead to a diatribe, Nehring steers clear of hypocritical finger-pointing, and his informal tone and vast knowledge of film history make this book into a fascinating and enlightening study. He promises that, by the end of the book, his reader will be unable to watch movies in the same way ever again, and he keeps his word. By the end of this intelligent, entertaining book, cinema will never be the same; rather, it will be yet one more tool to learn about and glorify our God.  Chandler Birch, www.ChristianBookPreviews.com

▼▲
I'm the author/artist and I want to review You Are What You See: Watching Movies Through a Christian Lens.
Back
Back