Shipment delay - click here for more details
What Is God Up To? - Why Earth?- Why Eternity?
By: Oliver E. Summers 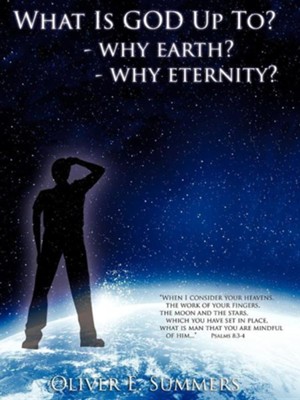 ▼▲
This book has been a life-time quest to understand why God created man and what God is after. It all started in March 1946 when I accepted Jesus Christ as LORD of my life. For sixty-two years I have diligently studied the Bible and sought to find out and to understand What Is God Up To? In December 2004, the LORD awakened me in the night and gave me the outline for the book, GOD HAS A PLAN AND A PURPOSE FOR YOUR LIFE, which was published in February 2006. On the morning of May 31, 2006, while in prayer, the LORD gave me the outline for this book that endeavors to answer the questions: WHAT IS GOD UP TO? WHY EARTH? WHY ETERNITY? I was to prepare a comprehensive study of the Biblical prophets and to correlate all they prophesied in a chronological order that would be related to Earths history and eternity. Oliver E. Summers received a call to the ministry in 1946 when he was a young teenager. His ministerial training began in 1950 when he attended Southern California Bible College (name changed to Vanguard University of Southern California) and graduated with a B.A. degree in New Testament. He attended seminary at Berkeley Baptist Divinity School (name changed to American Baptist Seminary of the West) and graduated with a M.A. degree in New Testament. He also attended University of California at Los Angeles and completed many courses in business administration. His pastoral ministry included pastorates in Oregon, Texas and California. He has served in the Methodist Church, American Baptist Church, Assemblies of God Churches and several non-denominational churches. He also spent time in the financial industry and served as President and Chief-Executive Officer of several independent community banks. For the past twenty-four months he has been in retirement preparing this book.