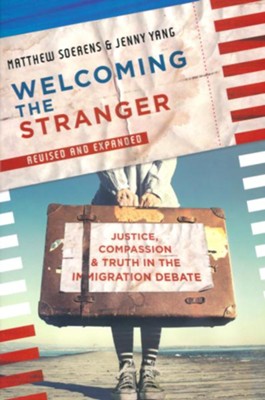 Welcoming the Stranger: Justice, Compassion & Truth in the Immigration Debate

Immigration is one of the most complicated issues of our time. Voices on all sides argue strongly for action and change. Christians find themselves torn between the desire to uphold laws and the call to minister to the vulnerable.

In this book, World Relief immigration experts Matthew Soerens and Jenny Yang move beyond the rhetoric to offer a Christian response to immigration. They put a human face on the issue and tell stories of immigrants' experiences in and out of the system. With careful historical understanding and thoughtful policy analysis, they debunk myths and misconceptions about immigration and show the limitations of the current immigration system. Ultimately they point toward immigration reform that is compassionate, sensible, and just as they offer concrete ways for you and your church to welcome and minister to your immigrant neighbors.

This revised and expanded edition includes new material on refugees and recent changes in policy.

Matthew Soerens is the US director of church mobilization for World Relief and the national coordinator of the Evangelical Immigration Table.


Jenny Yang is the senior vice president of advocacy and policy for World Relief.

"While Sorens and Hwang may not answer all your questions about the correct response to current immigration policies and, indeed, may even raise more complex questions, they do show us that, if we are to act justly, we will have to consider all its complexities."

" Welcoming the Stranger offers an introduction to the many aspects of immigration and the controversies surrounding it."

" Welcoming the Stranger lays the groundwork for and practically equips Christians to continue practicing what it means to follow Christ's commandment to love God and love neighbor in a fallen world."

"Soerens and Hwang argue persuasively that immigration has been and is valuable to the United States."

"Soerens and Hwang advocate a generous, biblically based invitation to all immigrants to take part in America. This book will not persuade all Christians to support liberalized immigration laws, but even the skeptical should find the authors' approach useful."

"Soerens and Hwang have injected justice, compassion, and truth into what needs to become a new conversation on immigration--values that are often in short supply in this debate."

"Soerens and Hwang do an impressive job making a complex and charged issue accessible for the average reader."

"In this highly engaging, well researched and documented book, Soerens and Hwang team up to survey and analyze the history of immigration in the United States and attempt to solve many of the problems that immigration faces through well-reasoned argumentation and personal experience. Most importantly, they do all of this not through the eyes of partisan politics, but rather through the lens of the Christian worldview. Welcoming the Stranger is a timely and important book at a point in America's history where the immigrant population is considerably growing and many Americans seek to 'do something about it.'"

▼▲
I'm the author/artist and I want to review Welcoming the Stranger: Justice, Compassion & Truth in the Immigration Debate.
Back
Back