Skip to main content
SPRING CYBER EVENT STARTS NOW: And it's a really BIG deal! Up to 88% off through 5/24>
Weight of a Flame, The Passion of Olympia Morata
By: Simonetta Carr
Stock No: WW381582 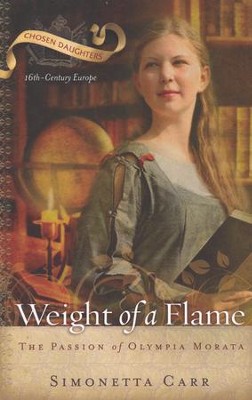 Weight of a Flame, The Passion of Olympia Morata

▼▲
Why write about Olympia Morata? Because the Italian Reformation is generally unknown but in the first part of the 16th century, sparks of Reformed faith burned brightly in Italy. Many groups were meeting for Bible study and prayer, and some members of the clergy were defending biblical doctrines. Of course, the Catholic Church-State could not tolerate such dissent. Italian believers were faced with three choices: compromise and silence, defiance unto death, or voluntary exile.
Olympia's story underlines the vital role that women played during the Italian Reformation. They organized prayer meetings, supported preachers, and interceded for those who were captured and condemned. Many were enough well-versed in Latin and Greek to be able to judge critically the theological works of their time.
Olympia Morata is a positive role model for many young women, because she lived her faith uncompromisingly until the end. Christ is also uplifted in her life, letters and writings.

▼▲
Olympia Morata (1526–1555) is a girl far ahead of her time. Appointed tutor to a duchess’s children, Olympia looks forward to a bright future—when suddenly, evil rumors threaten to turn her world upside down.

▼▲
Simonetta Carr, mother of eight and homeschool educator for twenty years, has worked as a freelance journalist and a translator of Christian works into Italian. She is the author of the series Christian Biographies for Young Readers.

▼▲
Simonetta Carr lives in San Diego, CA with her husband and 3 of her 8 children. She works as an Italian teacher and translator, as well as a journalist and author.

▼▲
By relating the life of Olympia Morata, (TITLE HERE) provides an inside view of life during the religious wars that ravaged Europe during the years after the Protestant Reformation. Readers will face, with Olympia, the daily dangers and insecurities that accompanied a faithful witness to the truth of the gospel and will find themselves challenged to consider how faithful they would be under similar circumstances. -- Starr Meade

With the precision of a scholar and the heart of a story-teller, Simonetta Carr brings to life the story of Olympia Morata, a daughter of the Italian Reformation. Persecuted, beseiged, exiled, and imprisoned, Olympia finds comfort in the new religious ideals that are sweeping through Europe, spurred onward by the writing and preaching of the Protestant Reformers. Through Olympia, Simonetta Carr tells the story of the unnamed and unknown who heard the words of Gospel promise and clung to them though that often meant risking their lives. More than strength of character, Simonetta Carr celebrates the strength of the God in whom these believers trusted. May we, and our children, exhibit the same trust in these days of our own pilgrim exile. -- Eric Landry, Executive Editor, Modern Reformation

In this delightful, yet informative historical- fiction we meet Olympia, a young girl willing to stand strong for her Christian values in the troubled, changing world of the Reformation. -- Laura E. Smith

Tell us a little about yourself.  I am Italian by birth, but have lived in different countries. I have taught elementary school until I married, then I have home-schooled my eight children for several years. I have written for various newspapers and magazines and have translated the works of Christian authors into Italian. Most recently, I have started a series of Christian Biographies for Young Readers, published by Reformation Heritage Books. I am a member and Sunday School teacher at Christ United Reformed Church.

What was your motivation behind this project?  P&R asked me if I wanted to contribute to their "Chosen Daughters" series and I was immediately excited. I have chosen Olympia Morata for several reasons. For one thing, she was Italian, and I think few people realize what an important role the short-lived Italian reformation played in 16th century Europe. Also, she lived a short and very adventurous life, documented first-hand in her letters and poems, and I felt that young girls today could easily relate to her feelings and struggles.

What do you hope folks will gain from this project?  This is always a difficult question to answer. I don't think a novel can be written with a specific agenda. I just hope that my readers will get to know Olympia as a young believer of her time. Opening our hearts and minds to other times and cultures is always important. In this particular case, Olympia matured immensely as a Christian in the few 39 years of her life, and I believe she will not leave anyone unaffected.

How were you personally impacted by working on this project?  Working with Olympia has changed my life in many ways, as I shared her excitement and disappointments, hopes and fears, until her final peace and rest in God. In some ways, I lived vicariously through her as I read and re-read every one of her writings, trying to understand her and portray her as she was, without interjecting my own feelings, thoughts, or personality.

Who are your influences, sources of inspiration or favorite authors / artists?  I have many favorite authors but I am not sure if any of them have influenced my style. This is my first novel, and this, together with the fact that English is my second language, somehow prevented me from concentrating on style. I focused instead on character arc, pace, and especially yearning, keeping the passion alive. I often wrote or at least mused on the story while listening to classical music, particularly opera.